Jim Morris isn't feeling sorry for himself. But somebody ought to give him a hug.

After losing for the third straight year to the rival Florida Gators in the NCAA Tournament, the last few weeks haven't been kind to Morris or his University of Miami baseball team. 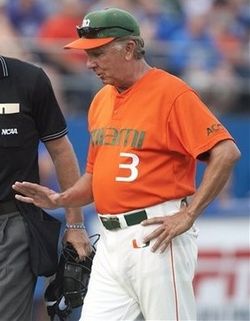 The team's top two incoming recruits -- third baseman Corey Spangenberg and left-handed pitcher Henry Owens -- were taken in the first round of the MLB Draft. He doesn't expect to get either of them.

Seven of his underclassmen were drafted and six according to Morris (infielder Harold Martinez, outfielder Nathan Melendres, catcher David Villasuso and pitchers Danny Miranda, Sam Robinson and Travis Miller) have already signed with their respective pro teams. Now Morris said he expects the one that hasn't, center fielder and team MVP Zeke DeVoss, to sign with the Cubs when he flies to Chicago on Saturday and meets with team officials.

"We just haven't been very lucky the last two years when it comes to the pro draft," Morris said Thursday. "I was hoping Zeke would come back, but it's probably not going to happen.

The Hurricanes, who finished 38-23 and ranked 24th in USA Today's final college baseball poll, will have to holes to fill over the next few weeks. Morris said that starts with replacing his three best relief pitchers, a center fielder, a first baseman and a catcher.

"The strength of our team is going to be the starting rotation -- we've got all those guys back," Morris said. "We've got Rony Rodriguez coming back, who was our leading home run guy and RBI guy. He made as much improvement as anybody on the team. But we have to improve offensively. Some guys will be good players. We just have to make some adjustments."

Morris is working on that. 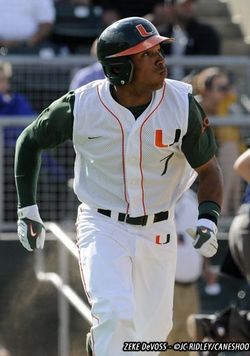 In the two weeks since hitting coach Joe Mercandante stepped down after four years on the job, Morris said he's spoken to people across all levels of baseball -- from super agent Scott Boras to general managers and scouting directors, who have all recommended someone for the job. Morris said he's narrowed his list down to five candidates and expects to make a hire in the next two weeks so that the new assistant coach can begin recruiting and evaluating players in the offseason.

"I've been absolutely bombarded with phone calls," Morris said. "I'm trying to make the right decisions based on a lot things. The No. 1 thing is to make our hitters better.

"Some of these guys don't want me to mention names. But I've had quite a few former players who played here and played for me in other places who have applied for a position. It's a hard thing for me. It's hard to talk to some of my former players and say 'No.' I've made some players mad at me over the years. In the end, I have to name one person. This is a very important call for me."

UM does have a few talented players who signed National Letters of Intent that could be coming in. Miami Columbus High left-hander Andrew Suarez (a 9th round pick), shortstop Jack Lopez (16th round pick) out of Deltona, right-hander Jace Herrera (36th round pick) out of Apopka and right-hander/outfielder Alex Fernandez Jr. (46th round pick). Morris said he also has verbal commitments from two junior college prospects and a transfer from another four-year program he can't talk about because they haven't signed National Letters of Intent.

But he's not counting on anybody coming until after midnight August 15th, the last day players can sign with the teams that drafted them.

"Last year we lost seven guys in the last 24 hours of that weekend," Morris said. "[Marlins first round pick] Christian Yelich signed at 11:59. At 11:58, we thought he was coming to school.

"I had a kid tell me once they weren't going to sign unless they got $500,000. He signed at the last minute for $75,000. So I never say this guy is coming or that guy is definitely coming. It's frustrating, but I try not to think about it. We just got have a little luck. We have to keep Jack Lopez. We need to keep [Andrew] Suarez. The guys who were drafted, we'll start with those guys and say we need to keep those guys. I'm not saying we will. But we need to."

> One player who definitely won't be coming back is freshman catcher Shane Rowland, who asked for his release. The former Tampa Catholic Aflac All-American started 41 games and hit .175 with one homer and 13 RBI. Morris said Rowland is probably headed to Junior College.