Mark Guandolo has coached quite a few talented linebackers throughout his career in South Florida. 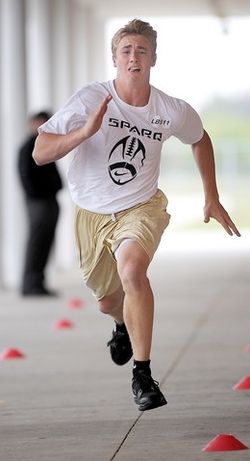 Two of his best at Hollywood Chaminade ended up becoming Hurricanes -- Glenn Cook and Jon Beason. His latest top-notch linebacker, Cypress Bay senior Josh Witt, is now planning to be one too.

Witt, who earned MVP honors at one of Al Golden's summer camps this past month, told UM coaches Friday he wanted to be a part of their 2012 signing class. The 6-2, 208-pounder outside linebacker, clocked by Guandolo with 4.5-speed in the 40-yard dash, had offers from 10 other schools including West Virginia, Louisville, Texas Tech, Wake Forest and Kentucky.

"All the guys I've had are different in their own way, but Josh to me is sort of a mix of Glenn and Jon," Guandolo said. "I think Josh has Beason's motor. That's saying a lot. Jon's one of the hardest players I've coached. And, he's tall like Glenn Cook. He's also a little faster than both of 'em."

Witt grew up in Texas and played as a backup quarterback for Guandolo as a sophomore. But in the spring of last year, Guandolo decided to move him to outside linebacker.

"He was a decent quarterback, but we just thought with his speed and because he was a real aggressive kid who wanted to hit people we just thought his ticket would be defense," Guandolo said. "He's just a real, real strong, tough kid with great speed. He ran the 100 meters for our track team. Just a great motor.

"He's just gotten better every day. Our playoff run last year really helped him. He played at his best then even with an injured wrist. His best game was against [eventual Class 6A state champion] Miami Central. To me, you can put him anywhere. He's one of those guys who can come off the edge or stay in the middle and play the run. He has the ability to drop and cover too."

Witt could end up being the first of several Cypress Bay players the Hurricanes bring in over the next couple seasons.

Left tackle Danny Isidora, rated the 26th best offensive guard in the country by Rivals.com, has UM in his top four according to Guandolo. "He's looking at Wisconsin, North Carolina, Michigan and Miami," Guandolo said of Isidora (6-3, 330). "I think he wants to make a decision before the season starts if possible. But Miami is right there. There's nobody leading. He's still evaluating."

Other Cypress Bay players UM is interested in according to Guandolo are 2013 running back Matt Dayes and 2013 receiver Alex Montgomery.

"The one thing you have to give Miami a lot of credit for is that they're trying to build something and they're out there looking, being thorough," Guandolo said.