The 2011 ACC Football Kickoff in Pinehurst, N.C. is just around the corner and we will finally start hearing from players and coaches after a long summer on Sunday.

Our Susan Miller Degnan will be there to report what she gathers from UM's reps at the event -- coach Al Golden, linebacker Sean Spence and center Tyler Horn, who is among our next five in our Canes' Top 40 Countdown: 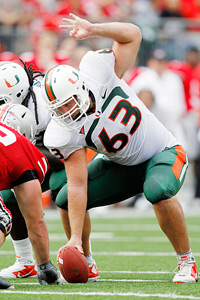 25. LB Kelvin Cain (6-3, 230, So.): Linebackers coach Micheal Barrow went out to California and found Cain, who outside of UM had offers from San Jose State, Fresno State an Nevada. Although Cain ended up playing in 11 games, it wasn't until he filled in and started for Colin McCarthy at middle linebacker against Duke that we saw what he was capable of. In that game, he finished with nine tackles (third most on the day) and had a forced fumble. He registered three more tackles the rest of the year. This spring, Cain played well, registering seven tackles in the team's second scrimmage and six more in the spring game. But his name wasn't on the two-deep. Since he is a littler bigger than UM's other young linebackers, I can see Cain serving as a backup to Jordan Futch at middle linebacker and Jimmy Gaines (6-3, 220) playing on the outside.

24. OT Jermaine Johnson (6-6, 320, So.): Seantrel Henderson and Brandon Linder weren't the only true freshmen who made an impact on the offensive line last season. Johnson played in 11 games, making five starts including the Sun Bowl. He graded out at 93 percent against Virginia and 92 percent against Maryland, neither were starts. At the end of the spring, he was listed as the starter at right tackle. Unless Ben Jones became Superman over the summer or Johnson gets hurt, he should start every game at right tackle for UM this coming season.

23. OG Harland Gunn (6-2, 310, Sr.): He's made 18 career starts including all 13 games last season. He had 13 pancake blocks and six lumberjacks. Graded out at 96 percent against Georgia Tech and at 95 percent against UNC. Gunn came to UM from Omaha, Nebraska rated the eight-best center in the country by Rivals.com and the No. 6 guard and No. 63 player in the country by Scout.com. If he can start and play in all 13 games this season, he'll finish with 31 career starts, not too shabby.

22. C Tyler Horn (6-4, 305, Sr.): Started all 13 games at center for the Hurricanes last season and graded out at 94 percent in the win against North Carolina, with six pancake blocks. He was named ACC offensive lineman of the week following the win over the Tar Heels and finished with 39 pancake blocks and seven lumberjacks, both third best on the team. He's on the preseason Rimington Watch List.

21. OL Brandon Linder (6-6, 310, So.): The St. Thomas Aquinas grad played in 12 games, starting five, all as an extra lineman in the jumbo package. He graded out at 97 percent against Georgia Tech, and was named the ACC Offensive Lineman of the Week for it. In the game, took snaps at center, guard, tackle, and tight end and helped the offense run for a season high 277 yards, and a season high 507 total yards. He graded out at 93 percent in the season opener and above 90 percent for the last seven games of the regular season. Few players have bigger upside than Linder, who I expect will once again play a lot and make an impact.