ARLINGTON, Texas -- During my stay in the Dallas area this fourth of July weekend I got a chance to go back and visit The Sixth Floor Museum, which chronicled the assassination and legacy of President John F. Kennedy just a few feet from where he was shot in Dealey Plaza. 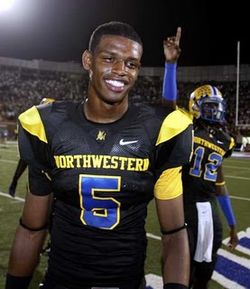 The last time I had been to Dallas and the museum was in 2007, a few days before Miami Northwestern played Southlake Carroll in the biggest high school football game I've ever covered. I did the tour of the museum with Jacory Harris, Sean Spence and Marcus Forston and shared a few laughs before the game.

Those Bulls, who eventually sent eight players to UM from that team, were so talented and so full of promise Hurricanes fans thought it would only be a matter of time before those local kids would lead the Canes back to national prominence. So far, it hasn't happened. Of those eight, only two --   Spence and offensive guard Washington -- have even made the All-ACC Team.

Of course, their careers aren't over yet. All eight could end up playing prominent roles this season.

We pick up our Top 40 Canes' Countdown with three of those former Northwestern Bulls starting with tackle Ben Jones...

35. OT Ben Jones (6-5, 310, Jr.): Three years into his career at UM and Jones is smelling a lot like the second coming of Chris Barney, a big, highly-touted Miami Northwestern offensive lineman who did nothing in his career at Miami. So far, Jones has only played in seven games, making his only start last season in the opener against Florida A&M because of suspensions to other players. He ended the spring as the co-starter at right tackle with Jermaine Johnson. But Johnson, who played in 11 games and made five starts a year ago, is going to be the starter in my mind until proven otherwise.

34. WR Kendal Thompkins (5-10, 182, Jr.): It says on his bio he played in 11 games and started four times last season. It also says there he made one catch for six yards. It's the last factoid that is more telling of Thompkins' contributions at UM. In three years, he's played in 23 games and has five catches for 45 yards and a touchdown to show for it. Funny thing is, Thompkins accomplished more than that in the Canes' most recent spring game alone, hauling in seven passes for 81 yards and a touchdown. So when are Canes fans going to see the Thompkins coaches and teammates always rave about in practice? Maybe this season in new offensive coordinator Jedd Fisch's offense. Or, if they're lucky, maybe Al Golden will invite them out to practice.

33. WR Allen Hurns (6-3, 185, So.): Randy Shannon absolutely loved Hurns' blocking ability and gave the former Miami Carol City product playing time in 10 games because of it. But Hurns never made a catch and spent most of his time on special teams, where he recorded four tackles (three solo) on the season. In the spring game with LaRon Byrd and Travis Benjamin out with injuries, Hurns made six catches for 64 yards. There's no reason Hurns can't become productive, especially as a possession receiver down the middle of the field. I think he goes for as many as 10 catches this season including a few big ones.

32. LB James Gaines (6-3, 220, So.): Hurricanes fans everywhere were a bit stunned when Randy Shannon offered Gaines, a two-star prospect out of the Buffalo area a scholarship in 2010. Gaines might stun them again this season by getting on the field and getting some real playing time. At the end of the spring, he was named co-starter at middle linebacker with Jordan Futch. Gaines, who played in six games last season on special teams and racked up one tackle, probably won't win the starting job over Futch come the season opener. But an injury or two and he'll be doing more than making tackles on special teams. One way or the other, I expect him to be on the field contributing.

31. WR Tommy Streeter (6-5, 215, Jr.): As big and as fast as he is (he was clocked at 4.3 seconds in the 40 last spring), Touchdown Tommy came to Miami with a lot of hype and expectations. Here's what he's produced in two healthy years -- five catches, 109 yards and a touchdown (a 42-yard grab against Notre Dame in the Sun Bowl). Streeter had a monster game at Traz Powell Stadium in the second of three UM scrimmages this past spring, hauling in six passes for 98 yards and two touchdowns. Then, a couple weeks later, he couldn't be spotted during the spring game, except for failing to bring in passes he should have caught. With Leonard Hankerson long gone, UM will be looking for a deep target this season. Will Touchdown Tommy answer? That's anybody's guess at this point. But the talent and potential has always been there.