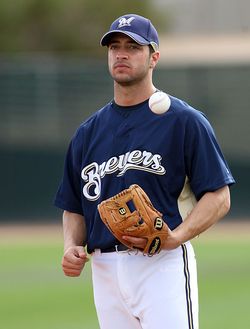 Morris had no idea he'd be calling him back a few hours later to congratulate him on something else -- getting his first invite to the All-Star Game. Perez and two former Hurricanes teammates -- Marlins first baseman Gaby Sanchez and Brewers outfielder Ryan Braun -- were picked to represent their respective leagues Sunday, making them the first trio in Hurricanes history to play in the same Midsummer Classic.

"That's great news," Morris told The Miami Herald Sunday afternoon after hearing the news. "I talked to Chris this morning and didn't even know it. Maybe he didn't either. They probably hadn't announced it yet. But it's great news. We've had some really good players here over the years and it's a credit to our guys and our assistant coaches for getting to the next level and continuing their success."

For Braun, the leading vote getter in the National League, it's his fourth consecutive All-Star Game appearance. But for Sanchez and Perez it marks the first time in their careers they've been All-Stars. The only other time UM has had more than one former Hurricane in the same All-Star Game was in 2001 when catcher Charles Johnson and outfielder Greg Vaughn each made it.

Prior to Sunday's selections, UM had only had five former players make it to the Midsummer Classic -- pitcher Danny Graves (2000, '04), pitcher Neal Heaton (1990), Johnson ('97, '01), Vaughn (93, 96, 98, 01) and Braun. Former Dodgers, Marlins and Mets catcher Mike Piazza played six games at UM before going pro. He played in 12 All-Star Games, but he doesn't really consider himself a former Hurricane. He played more at Miami-Dade College.

The Hurricanes currently have 10 former players up in the major leagues. Aside from the three All-Stars, outfielders Pat Burrell and Aubrey Huff are playing for the Giants, infielder Alex Cora is with the Nationals, outfielder Jason Michaels is with the Astros, outfielder John Jay is with the Cardinals, third baseman Danny Valencia is with the Twins, and former second baseman Jemile Weeks was recently called up by the Oakland A's.

Kreuter, a USC transfer who hit .228 with nine RBI in 57 at-bats as a sophomore for UM, has eight hits (three doubles) and three RBI for the CCL’s Academy Barons this summer. He has started 11 of 13 games. The game will be televised live nationally on Fox Sports Net.