When Gino DiMare stepped down as UM's assistant head coach in 2008, it wasn't because he was disappointed with what he was getting out of his hitters or he was doing a bad job as recruiting coordinator. 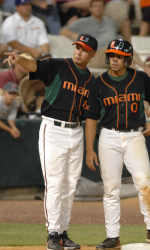 "Coach [Jim] Morris certainly didn't want me to leave," said DiMare, who served as an assistant from 1997 to 2008 and the team's recruiting coordinator over his last nine seasons. "I had two kids -- [ages] three, one, and another one on the way. My life had changed kind of quickly. It's tough when you're away from your family. People don't realize that. When they hear a coach say 'I'm stepping away to be with my family,' they think that's a cop out, bologna deal. It is for some guys. But it wasn't for me. I had a really tough time getting on a plane and being away from my kids all summer.

"Three years later, I have three daughters who are 6, 4 and 2 and I think they're all dying for me to get out of the house."

Nobody was happier to hear that than Morris, whose team hasn't been able to get back to the College World Series -- or past the University of Florida -- since DiMare left.

Miami’s offense ranked among the top 10 in school history in eight of DiMare's nine seasons as the club's hitting instructor. The 2008 team that advanced to the College World Series and spent much of the season atop the national collegiate baseball polls finished the year hitting at a school eighth-best .320 average, while also ranking tied for second in home runs (106), fourth in slugging percentage (.541), eighth in total bases (1,202) and RBI (517), tied for ninth in doubles (135) and 10th in hits (711).

"I'm not coming back to just get to an NCAA Tournament," DiMare said. "Coach Morris knows how I am. He and [pitching coach] JD [Arteaga] are used to winning and going to Omaha. The fans are used to that. I am as a former coach and player at Miami. I certainly wouldn't be coming back if I didn't feel the program could get back to Omaha. I wouldn't put myself in that situation. I think we can get it turned around. I don't think they're that far off. But there's no doubt we have to get it going in some areas, hitting is one big area where we have to get it turned around. And we will get it turned around."

Thursday, his first official day on the job, DiMare said he was already out watching a double-header of games in South Florida and was preparing to meet with Arteaga and Morris in the evening to discuss their recruiting plan.

DiMare said he plans to be aggressive in finding players who can help UM right away.

"Recruiting has changed in that kids are committing a lot earlier now," DiMare said. "We have commitments not only for 2012, but we got commitments for 2013 and upcoming juniors. My last couple years I saw schools become very aggressive in getting kids to commit early, which I'm not a big fan of. But that's the way the game is played and that's the we're going to play it."