Rob Vite, football coach at Sanford Seminole High School, usually gets a ton of mail from colleges interested in his players. But most of the letters he's been getting this summer are coming from somewhere else -- the NFL. 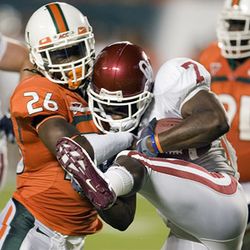 Teams and scouts across the league have been mailing Vite questionnaires for him to fill out, all concerning former star quarterback and current University of Miami safety Ray Ray Armstrong.

"It's kind of been the same process as when colleges came to recruit high school kids," Vite said. "Except, they're digging a little bit. What kind of kid is he, character, everything about him. I'm sure Coach Golden is getting a lot of them too."

If his junior season pans out the way most hope, Armstrong may not be in college much longer. ESPN draft guru Mel Kiper recently rated Armstrong (6-4, 215) the No. 1 junior safety in the country. Armstrong, an All-ACC Second Team pick as a sophomore, has also been named to the Bednarik, Nagurski and Jim Thorpe award watch lists.

Big expectations? Vite said Armstrong, who led Seminole to the Class 6A state title in 2008, will exceed them all.

"It's going to be a great year for him," said Vite, who talks to Armstrong once a month and recently saw him when he returned home the last weekend in May. "He just has to go out there and be Ray and he'll be okay. He's a monster man. I don't know how much bigger he is, but he has more muscle, ripped. He's excited for the season and for the [coaching] changes. He knows its going to be a big year for Miami football."

Last season, Armstrong registered a team-high tying three interceptions and ranked third on the team with 76 tackles. He returned one of those interceptions 22 yards for a touchdown against Florida A&M, and racked up a season-high nine tackles against both Ohio State and Florida State.

Vite said Armstrong will be returning home to Sanford the final weekend in July -- a week before UM opens training camp -- for the city's second annual "Ray Ray Day." Last year, his father Albert organized the event to give back to the community. The event included free food, music and entertainment (jump houses) for kids and fans got an opportunity to catch up with Armstrong and wish he and his teammates well on their season.

"We all believe in him. Not a lot of guys are going to go to UM and take No. 26 and really fill that number and the pressures that go along with that number. But he has and he will."

> Senior Tyler Horn was named to the preseason watch list for the Rimington Trophy, given annually to the most outstanding center. Horn had 39 pancake blocks and seven lumberjacks, both third-best on the team in 2010 and started all 13 games. He was named Atlantic Coast Conference (ACC) Offensive Lineman of the Week following the Hurricanes' win over North Carolina on Oct. 23.

> Season Ticket sales representatives will be at Sun Life Stadium from today through Saturday for Select-A-Seat Week. You can purchase your tickets or schedule an appointment by calling 1-800-GO-CANES or by emailing canestix@miami.edu.