Reggie Johnson to miss 5-6 months with torn meniscus in right knee; Larranaga hopeful center will be back for ACC play

Miami Hurricanes center Reggie Johnson will be sidelined for five to six months after having surgery Thursday to repair a torn meniscus in his right knee.

UM is hopeful Johnson, who injured the knee during a pick-up game with teammates on Monday, will be able to return in time for the start of Atlantic Coast Conference play in January. 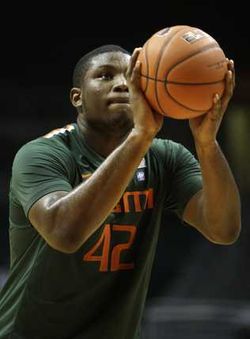 “If there's any positive way to look at it, it's better now than if it happened in December," UM coach Jim Larranaga told The Miami Herald.

"Reggie has some time to work on rehabbing the knee and trying to get back for at least a portion of the season. It is a devastating blow because of the real optimism we had when Reggie elected to pull his name out of the draft. Now, we have to rethink our plans for the upcoming season. We have to try and figure out who will fill that very big void."

The 6-10, 305-pound junior from Winston-Salem, N.C. started 34 games last season for UM and earned All-ACC honorable mention honors after averaging 11.9 points and 9.6 rebounds a game. He tested the waters of the NBA Draft last spring and elected to return.

Guard Trey McKinney-Jones, who was there when Johnson injured his knee on Monday, said initially no one at UM thought Johnson’s injury was very serious.

“No one touched him really,” said McKinney-Jones, a junior transfer who will be eligible this season after transferring in from the University of Missour-Kansas City. “He just came down wrong and kind of limped off the court. He wasn’t rolling on the ground, screaming. We thought it was just something small.”

But an MRI on Tuesday reveraled a tear. Doctors informed Johnson it would be better to repair the meniscus for his long-term future instead of letting it heal on its own. And that’s what he opted for.

“Honestly, he’s a huge part of this team,” McKinney-Jones said. “He was dominating on the court with us, looked real good. It’s going to hurt not having him, but we’re such a deep team. With the new coaching staff, they’ll get us ready to make the adjustments without Reggie. I think the sky is still the limit for us.”

As a sophomore, Johnson was Miami’s leading rebounder and third-leading scorer, converting 59.1 percent of his field goals (the third-highest single-season percentage in UM history). He also averaged a team-high 1.3 blocks per game. He finished the season ranked second in the ACC in offensive rebounds (3.5), fourth in both defensive rebounds (6.1) and overall rebounds and 20th in scoring.

"I don't know that much about Kenny's game," Larranaga said. "There's no video of him playing with Miami. I only got to see him during our brief individual workouts.

"Julian Gamble is working very, very hard rehabbing his injury. He's been playing daily. But he didn't do any individual stuff in the spring."

The Hurricanes, projected by some to be a Top 25 team, lost just one player (three-point specialist Adrian Thomas) from a 21-15 team reached the NIT quarterfinals.

Larranaga said Johnson has stayed positive since the injury.

"He was in good spirits before the surgery and he came out of it in good spirits," Larranaga said. "It was just a pick up game. He twisted it. Bad luck."

> Larranaga said he's had a chance to work on his team's schedule for the upcoming season, but still hasn't finalized it.

"We have very, very good top 50 teams on our schedule. As I told our team, the goal of scheduling is not just to play great teams, but play a schedule that will allow you to compete for an at-large bid [in the NCAA Tournament]. It's about developing a good RPI ranking in the non-conference. That will determine if you are even in a position to earn an at-large bid."

Larranaga said he and his assistants will be spread out throughout the country over the next month recruiting. He said he's already met "a ton of local high school coaches" during a team camp and coaches clinic at Miramar High last month and emails them everyday.

"We have a lot of catching up to do with the kids who are going to be seniors because we haven't been here to recruit those guys," Larranaga said.

"Many schools in our league and the SEC have been involved with these young men for a year or two. What we need to do is develop relationship with 10 graders who will be juniors. That will be the first recruiting class we'll be able to develop a relationship with for a year and that's what we we have to do this July in order to make this a successful recruiting class."