Aldarius Johnson's mother hires lawyer, wants explanation on why her son has been suspended indefinitely by Golden

Shantera Walker-Johnson is one angry mom and she wants someone to clarify why her son, senior receiver Aldarius Johnson, was suspended indefinitely by University of Miami football coach Al Golden on Tuesday. 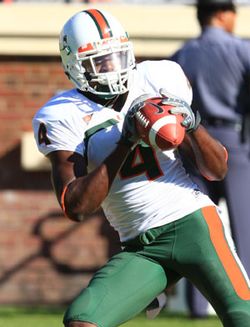 Johnson, one of a dozen players fingered by imprisoned former Hurricanes booster Nevin Shapiro for allegedly taking impermissible gifts, was interviewed by NCAA investigators two weeks ago according his mother.

But unlike 13 of his teammates who heard back from the NCAA on Tuesday in regards to their eligibility, Johnson's name was nowhere to be found on the NCAA's findings and penalties report. Instead, UM sent out a press release Tuesday saying Johnson, the team leader in receptions in 2008, had been suspended indefinitely by Golden for a violation of team rules.

"What UM told me when I called is that they're waiting on the NCAA to clear him," said Walker-Johnson, who says she's hired an attorney to help get her son reinstated. "I don't see his name anywhere on the NCAA website about the case. I figure if they had the other players names up there, and what UM was telling me was true, it would say Aldarius Johnson's case is still pending. And it doesn't.

"To me, they're trying to set an example with Aldarius. But he's not the one to set an example on. I'm not going to allow it. I'm going to fight until I get some justice. He's not the fall guy. Go back at Shapiro and point the finger at him. You all let him come to your university, gave him a hall with his name on it, you had coaches taking these kids to meet this man. It's not fair to put it all on Aldarius. He is not Nevin Shapiro. He ain't did nothing."

Other news outlets -- including Yahoo! Sports investigative reporter Charles Robinson -- reported through sources that Johnson was less than forthright in two interviews with NCAA investigators while the rest of the UM players questioned by the NCAA admitted they had received impermissible gifts.

UM associate director for communications Chris Freet, however, told The Miami Herald Wednesday Johnson's suspension was not-related to the NCAA investigation, but rather the result of what Johnson did last last week. Freet said Johnson was actually suspended indefinitely on Sunday, but the announcement wasn't made until after the NCAA's ruling because the school was waiting until after the ruling for all roster news to come out at once. Freet confirmed Johnson is still enrolled at UM.

Walker-Johnson said her son told her he recently got in trouble for breaking "Team rule No. 10," a Twitter-related rule in place by Golden. On Saturday, during Canesfest, an autograph event involving players and fans at the BankUnited Center, Johnson sent out a tweet on his account (adjohnson04) asking his followers what the best strip club in Miami was. It has since been erased.

"They said it was tweeted by Aldarius, but at the time Twitter came through, he was signing autographs, taking senior pictures at Canesfest," Walker-Johnson said. "And are they really suspending him because of that? He can't practice or do nothing with the team because of that. He's got to sit in study hall and watch as his teammates practice. That's not a reason to suspend him. To me, it has nothing to do with it. What they keep telling me is he can't participate is because his case is pending. To me, they just want to make an example of him."

Of the 12 players named by Shapiro in the Yahoo! report, Johnson had the most allegations against him. Shapiro claimed he provided Johnson with dinner at Benihana in 2008 followed by VIP access and approximately $5,000 in entertainment and drinks for Johnson and other players at The Cheetah Gentlemen’s Club in North Miami Beach.

Shapiro also alleged that he gave Hurricanes equipment staffer Sean Allen $150 to have Johnson’s car removed from a towing lot, and providing Johnson with multiple cash gits totaling in thousands of dollars.

“Aldarius was always calling me if his mother couldn’t pay the bills, or the cat had a problem or the dog ate his homework," Shapiro told Yahoo! "I just gifted him money at least 10 times, from the low end being like $50 [to] the high end being probably like $300 to $400. I’d say he took a couple grand from me over the course of time.

“He just became very heavy maintenance – high maintenance. I inevitably just broke the chain because I couldn’t take the calls from him anymore. It was always about wanting something.”

Asked if her son lied to NCAA investigators, Walker-Johnson said: "That's not true. For one, you can't make him say he was somewhere and he wasn't. That's the issue. You're going to make him lie? He's not supposed to be lying. Here's a convict who did lying for a living and the school would say Nevin Shapiro is not lying, but you are Aldarius? I don't think so. If the NCAA felt that way then why wouldn't they have ruled a punishment like they did to other kids?"

Walker-Johnson said her hope in the end is to get her son reinstated so he can finish his senior year at UM. Johnson, who came to UM as the all-time leading receiver in Miami-Dade County after a stellar career at Miami Northwestern, had been trying to make a comeback after two disappointing seasons after a solid freshman year. His name, however, is no longer even listed on UM's roster.

"He graduates in 12 weeks," Walker-Johnson said. "My main concern is in a couple weeks he will be walking across the stage, getting his degree at the University of Miami. But he didn't just come to UM to get a college degree -- he came to play college football. How are you going to take that from my son when he needs a breakout year to go pro? If this got anything to with the NCAA, he should be able to practice and do everything else but play in a game.

"My son has been doing everything he was supposed to do to better himself, even more than what he was supposed to be doing. That's what he don't get. 'Mama, I done everything they've told me to do. You mean to tell me football is over?' Do you know what that means to hear from my child? It ain't over son. It's not over.'"