The University of Miami had its first scrimmage of the fall Sunday afternoon (it was closed to the media). Here are some of the highlights according to UM and insight from coach Al Golden from an interview done by the sports' information staff 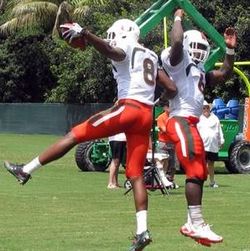 > Golden called the quarterback play "excellent." According to UM, the quarterbacks combined for 407 yards through the air on 38-of-52 passing for six touchdowns and only one interception.

“I’d be interested to see where our [completion] percentage will be for the day, but I thought we did a good job,” he said. “We found our check-downs a couple of times and to me that’s very important. Lamar [Miller] made a big play, we hit the tight ends [with passes] underneath with Clive [Walford], Cory White -- and we got a couple explosive [plays] down the field as well.”

According to UM, White and Walford stood out among the tight ends, making key grabs in the middle of the field and in the flats. Sophomore Asante Cleveland caught a touchdown pass near the goalline according to UM.

> According to UM, receiver Tommy Streeter had five catches for 71 yards and three touchdowns -- including one heck of a TD grab according to Golden. "It was a tough one. He went up where he was above the goal post there and snatched it. It didn’t look like he had a chance, to be quite honest with you, but he really got up high," Golden said. "The biggest thing with Tommy right now is he’s more mentally tough and he’s in really good shape. He’s learning how to play at a higher level and he’s catching tougher ones every day.”

> UM's offense committed only one turnover. Middle linebacker Jimmy Gaines made the interception. UM didn't say who threw it. According to UM's stats, Gaines finished with five tackles and a sack as well.

"Jimmy’s doing a good job for us,” Golden said. “It’s going to be quite a competition inside there at linebacker. Gionni [Paul] and [Jordan] Futch will have something to say about it. We’ll see how it shakes out.”

According to UM, senior cornerbacker JoJo Nicolas led all defenders with eight tackles (six solo) and two tackles for loss. Senior linebacker Ramon Buchanan and freshman Gionni Paul each had six tackles, with Paul also recording a tackle for loss. In all, the defense totaled eight tackles behind the line of scrimmage for a total loss of 29 yards according to UM. The defense also stopped the offense in five of eight 4th-and-1 situations.

> According to UM, junior kicker Jake Weiclaw was impressive in connecting on 2-of-3 long field goal attempts. He was successful from 45 and 54 yards out on consecutive possessions, before narrowly missing left on a 56-yard attempt according to UM.

> Golden said he was pleased with running backs Lamar Miller and Mike James. But he was "disappointed [the offense] didn’t execute as well as we need to in the short-yardage situations, both the ones we set for them and the ones that occurred naturally in the flow of the scrimmage.”

> Golden said he wasn't pleased with the tackling in the second half. "That might be a function of fatigue, but that’s inexcusable,” he said. “We’ve got to be better. I thought we were really good early on, to be honest with you. I thought we wrapped up well and pursued with force. And then we tailed off a little bit.”

> Golden will give players the day off on Monday. He invited the team back to his house tonight for a BBQ and a pool party.

> The scrimmage was closed to the media and open only to recruits, family and special guests.