CORAL GABLES -- We interrupt your Hurricanes football frenzy for news on the baseball and basketball teams. First hoops. 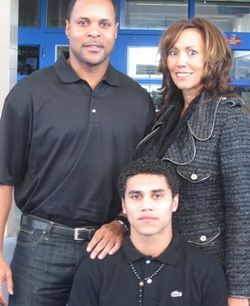 Shane Larkin, a transfer from DePaul, officially signed with UM Friday and is enrolled in classes, but can't play this season per NCAA transfer rules.

The 5-foot-10, 160-pound point guard from Orlando Dr. Phillips High was the Class 6A Player of the Year runner-up to Austin Rivers as a senior after leading his team to a 27-6 record and the state championship while averaging 18.8 points, 6.4 rebounds, 6.3 assists and 3.5 steals per game.

Larkin will be allowed to practice with the team this season.

BASEBALL: Now to the diamond where UM announced it's signing class Friday. According to UM's sports information staff the Canes could announce two more signings in the coming days...

Alexander Fernandez, 2B, R/R, 5-9, 180, Archbishop McCarthy
- Son of former UM pitcher and Marlin Alex Fernandez. Drafted in the 46th round by the Tigers in 2011 Draft. Hit .513 with 34 RBI and went 10-0 with 50 Ks a senior, leading his team to back-to-back state championships. Named First Team All-Broward Class 4A-1A by The Miami Herald.

Patrick Kulick, RP, L/L, 6-1, 205, Parkland Douglas
- According to InsideTheU.com, Georgetown, Florida, Florida State, Wake Forest, and Duke were among the schools recruiting Kulick before he picked the Hurricanes. This past season was frustrating for Kulick, who suffered a minor right knee injury, which prevented him from only playing in 12 games. He hit .500 with two home runs and only pitched three innings and did not allow a run. He hit .421 with 5 homers and 26 steals as a junior.

Jake Lane, OF, R/R 6-0, 185, Tavernier Coral Shores
- Selected in the 45th round by Arizona in the 2011 MLB First-Year Player Draft. Lane was The Key West Citizen's 2011 Monroe County Baseball Player of the Year after he hit .493 batting average with seven home runs and 28 RBI. Had a 4.56 GPA, was Senior Class President and Homecoming King.

> UM had four other players who were originally part of their 2011 signing class who ended up elsewhere. Third baseman Cory Spangenberg (Indian River State College) was taken 10th overall by the Padres in the 2011 draft and signed with them; Huntington Beach, Calif. left-hander Henry Owens was drafted 36th overall and signed with the Red Sox; Wekiva High (Orlando area) right-hander Jace Herrera is no longer going to sign with UM; and Deltona High shortstop Jack Lopez signed after being drafted in the 16th round by the Royals.