CORAL GABLES -- UM offensive coordinator Jedd Fisch spoke to reporters after Saturday's media day and was asked how possible suspensions or player eligibility issues could affect his offense this season.

"I think we'll be able to handle it accordingly," Fisch said. "We've got a lot of very good players. I think when we get our players together and assess who we have at that point in time I feel great about our depth and everything that is going to happen." 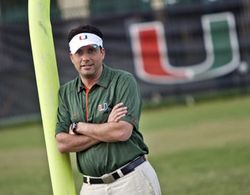 Here's what else Fisch was talking about...

What did you see out of Stephen Morris in camp that you liked?
"I think that all the quarterbacks did a tremendous job performing. The quarterbacks are getting better every day. When it comes to Stephen, he's shown great leadership. He's shown that he can make all the throws, and most importantly that he can command the huddle."

How important was it for the quarterbacks to avoid throwing interceptions in camp?
"It was fun for them. They're excited they can walk away from the last scrimmage and I think go 39 of 52 for 500 yards and no interceptions. If we can have days like that, that's tremendous. But obviously those aren't necessary all the expectations. The expectations are playing smart, and I think their confidence has grown with more knowledge of the offense and what we're trying to get done."

Can you talk about Tommy Streeter? He had a huge camp it seems.
"I think the wide receivers have all had a really good camp. I'm excited to watch them perform when it comes to game time. At practice they've all really gotten better. Tommy Streeter has really stepped up his game. He's made a lot of catches, a lot of big plays. He's an explosive receiver. It's really fun to watch Allen Hurns. It's fun to watch LaRon Byrd and Travis Benjamin and how they all work together. And the young guys too - Phillip Dorsett and Rashawn Scott have done a tremendous job. Coach [George] McDonald has those guys playing at a really high level."

How do you attribute the quarterbacks throwing fewer interceptions in camp?
"I'm hoping that it's their experience. It's one more year of experience for both of them. That's No. 1. No. 2, what we're asking them is to get in and out of bad plays. If we have a negative play or that doesn't look real good, we've given them the ability to audible and check into a play that will work. So I think that has really helped them not to cram a ball into a tight space or force a throw. And also we've really encouraged them to check down, find a running back and go from there."

Can the element of surprise in your offense be really helpful this season?
"I hope it's to our advantage. I said to our guys the whole time that it's our responsibility to keep what we do on offense to ourselves. When it comes down to next Monday night to be able perform at the highest level and hopefully use it to our advantage. There is no film on what we do; there is no examples of what it's going to look like for [Maryland's] defense, and we have to use that to our advantage."

How excited are you about the receivers?
"The one thing I'm most excited about is their knowledge of the game. The quarterbacks and receivers, whole lot of them, all understand the game better. They understand that press coverage equals this, Cover 2 equals this. These are the things that we need to take advantage of. Our ability to audible, get them in better position is really a credit to how hard the players have worked."

Is this team ready for the opener?
"I think that they are. I think they're excited about it. How could you not be? It's a Monday night game. It's at 8 o'clock on national TV on ESPN, it's an opportunity for them to perform. These guys are all big time players, played in big time games before. Stephen's played Maryland before. Stephen came back and brought the team back to a victory, scoring with 35 seconds left last year. Jacory has played in a ton of big games. So these guys have all played in big time games and they'll be fun to watch -- if the quarterbacks, receivers and offensive line do what they need to do."

What will picking the starting quarterback come down to?
"I think when it's time to make that decision and coach (Al) Golden makes that decision it's based on everything we've done, and it's a full assessment of everything that's gone on - training camp, spring practices and everything in terms of their work ethic as well."

What have you seen from your tight ends? Blake Ayles has been out due to injury for a while now.
"The tight ends we have are all playing at a high level. It's exciting to see Asante Cleveland come back from the shoulder situation he had. It's exciting to watch Clive Walford develop, Chase Ford develop. Hopefully Blake will be ready to go. We've got four solid tight ends that are really playing at a good level. We also have fullbacks that are playing both the fullback and tight end position. When you mix in [John] Calhoun and [Maurice] Hagens and those four guys, we've got nice depth at that position."

Were there any down moments during camp?
"We played with really high energy during camp. There was a lot of excitement. There was a lot of newness, and guys are going out there and having fun. We tried to keep it exciting, fun for them. Most importantly I think they were stimulated, because they had to think, always be on top of their game. We made every day a challenge."

How much has the NCAA investigation affected the team's spirits and the coaches decisions on who might start?
"It hasn't affected it at all. They have been outstanding. Our group has been great. We've gone out every single day, had a blast. We have fun in our meeting room, on the practice field, and they're performing at an extremely high level. I don't even know when that all came out, but I know it came out before a scrimmage that our guys played extremely well at. So I'm excited about every way we've practiced. Whatever happens with that happens with that, but we don't talk about that. We just talk about what we can do on offense to get better."

Will Spencer Whipple be ready if he needs to play?
"He had an unbelievable spring, took the first snap in the spring because of how hard he worked in the off-season program. Spencer understands the game, his work ethic is tremendous. He's ready to do whatever is needed to do to play the best we possibly can on offense."

How has Ryan Williams looked?
"He has done a great job of everything we've asked him to do. But his situation is different because he transferred in [and will probably redshirt this season as a transfer]".