« Golden counting on Jacory Harris, others to provide leadership that was lacking at Maryland | Main | Canes tight end Blake Ayles (concussion) out for the year »

CORAL GABLES -- Brandon Washington spent his senior season at Miami Northwestern protecting Jacory Harris' blindside. The 6-4, 330-pound junior, selected to the All-ACC First Team as a guard last season, may get a shot to do that again Saturday against Ohio State according to coach Al Golden. 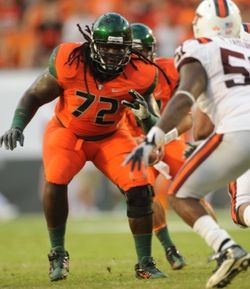 While Golden said the team makes sure to work different combinations, the final decision won't be made on who starts where until coaches sit down and talk about it Thursday.

"As we always do, we always work all different kinds of combinations during the week," Golden said on Wednesday's ACC Coaches Teleconference. "We've had Brandon at left [tackle] just like we did before the last game. We've had Brandon at right. We've had Fig at left and Fig at right. We've had Feliciano at right guard and right tackle and we've had [Malcolm] Bunche] at left tackle and right tackle. We're going to continue to do that. As the coaches choose the starting lineups here [Thursday], we'll go from there. But Brandon has and will continue to work at both left and right."

The bigger news could be that Feliciano, a former standout at Davie Western High, could crack the starting lineup. He didn't play a down last season and was on the scout team.

"Feliciano is playing good football right now," Golden said. "If he's not in the top five right now, he's probably No. 6 or No. 7. Clearly, he's put himself in the top five or six offensive linemen on the team. We just want to make sure we get the best five on the field. He's made a lot of progress in the off week. I know I said that during training camp too. He's garnered more time. We'll decide who is going to start where and how much they're going to play as we get into tomorrow as a staff. The biggest thing is we continue to build depth there."

Golden said after Wednesday's practice Ohio State will be "as physical a team as we'll see."

"They're extraordinarily physical, rugged, high motor guys and excellent at hand-to-hand combat," Golden said. "We have to play a physical brand of football. That's their strength in addition to the speed they have on the perimeter."

Golden said Tuesday sophomore All-American Seantrel Henderson, who was expected to be the team's starting left tackle before having back surgery in August, is a making a lot of progress in his rehab and could return sooner than later.

“I’m pleased with him," Golden said. "I know he’s excited. He can sense that it’s closer than he thought... I don’t know what that means because I’m not the doctor and I’m not going to sign off on it. They’ll tell us when he’s ready to go, but you can sense it -- he’s out there Sunday running around. I think he gets the sense that it’s going to be sooner rather than later.”

> Golden said redshirt freshman David Perry is back at tight end after playing defensive end against Maryland. Perry (6-7, 260) has been moving back and fourth between the two positions.

> Golden said "cornerback play will determine if [senior JoJo Nicolas] goes back to cornerback" once Ray-Ray Armstrong is done serving his four-game suspension. "If those guys continue to improve then we'll keep JoJo at safety," Golden said.

> Golden said three players are competing for the two starting defensive tackle jobs -- junior Marcus Forston, senior Micanor Regis and junior college transfer Darius Smith. "The other competition is [Olsen] Pierre and [Jalen] Grimble to see who will be the fourth," Golden said. "That won't be determined until game time."

> Golden had high praise for sophomore Jimmy Gaines, who made his first career start at middle linebacker against Maryland. Gaines had 7 tackles (1 solo) in the game.

"Jimmy Gaines has played like a Miami Hurricane," Golden said. "Jimmy's first play and last play looked the same. He was relentless to the football. He's one of the models for us in what it should look like on defense. He's a cerebral player, a smart player. We're excited about his future."

> Golden said freshman cornerback Thomas Finnie is progressing. "Finnie is almost 180-pounds now; he was 160 when he came in," Golden said. "He's made a commitment. He's a tough kid, he loves football and his reps are just going to continue to increase as the season moves on."

> Despite getting burned on a big pass play versus Maryland in the fourth quarter that led to the Terrapins go-ahead field goal, Golden said junior Brandon McGee has pretty much won one of the starting cornerback jobs moving forward. On the other side, it appears fifth-year senior Mike Williams and senior Lee Chambers will split the bulk of the playing time.

"McGee made a lot of progress. He got beat off the press late in the game and [Danny O'Brien] made a perfect throw. McGee is working harder, a little more mature, is fighting through discomfort a little bit," Golden said. "And on the other side it's a good battle. Both guys are hungry, haven't played a lot of football certainly here at the University of Miami. Both are scratching and clawing to play and it looks like they'll share time going into the game."

> Golden said he would like to get his tight ends more touches this week versus Ohio State. Asante Cleveland, Clive Walford and Chase Ford combined for three catches for 10 yards against Maryland.

"Hopefully they've kind of settled in now, get a chance to move forward," Golden said. "[Walford is] athletic, can get down the field, knows how to get open in space. He's got good hands. Anybody at our scrimmages in the spring would say that's a guy we have to get the ball to, and they're right. We have to do a better job as a staff and as players of doing that. Hopefully he'll be more involved this week."