« Brandon Washington could start at left tackle vs. Ohio State; Feliciano moving up, could start at RT | Main | Canes CB recruit Larry Hope suffers 'six-inch gash' in head Thursday after being cut by another player's facemask »

Canes tight end Blake Ayles (concussion) out for the year

CORAL GABLES -- Blake Ayles' career at the University of Miami won't get started anytime soon. The senior tight end and transfer from USC was ruled out for the season Thursday after suffering a concussion early in training camp. 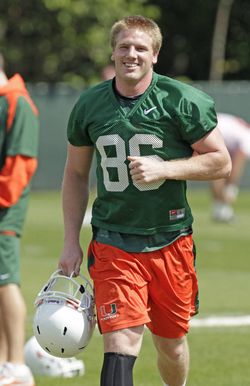 Ayles (6-5, 265) was expected to provide leadership and experience to the tight end unit. After being tabbed as the second-best tight end in the country coming out of high school, Ayles played sparingly at USC and caught just 14 passes for 182 yards and 1 touchdown in 27 games with the Trojans.

Ayles, who has a history of concussions, has never redshirted and could seek a medical redshirt to return next season. Ayles joins tight end Cory White and walk-on linebacker Eric Lichter as Hurricanes ruled out for the season.

> UM coach Al Golden told reporters Thursday Marcus Forston and Micanor Regis will start at defensive tackle and Mike Williams will get the start over Lee Chambers opposite Brandon McGee at cornerback Saturday.

Golden said that no starter has been determined in the battle between Anthony Chickillo and Adewale Ojomo at defensive end and it will be a game-time decision. Golden said Travis Benjamin and Allen Hurns will be UM's starting receivers.