Even with suspensions, D'Onofrio says he isn't scaling back Canes defense for Maryland

CORAL GABLES -- With five key pieces on his defense with 66 combined career starts suspended by the NCAA for Monday's season-opener at Maryland, one might imagine Hurricanes defensive coordinator Mark D'Onofrio would be a little nervous this week. 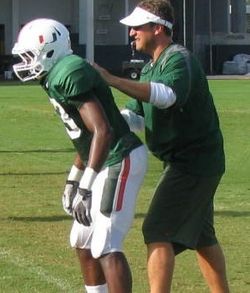 But the Al Golden's right hand man is hardly shaking in confidence with what he has left. In fact, D'Onofrio said Thursday he isn't planning on scaling back any of his defensive plans for the Terrapins just because linebacker Sean Spence (29 career starts), safety Ray-Ray Armstrong (4) and defensive linemen Marcus Forston (13), Olivier Vernon (13) and Adewale Ojomo (7) will sit out.

In his mind, it's "a next-man in mentality" -- basically what many of his players have been saying now for more than a week.

"It's definitely calmer. There's nothing else you can do," D'Onofrio said of the Hurricanes' mood now that they know who will be out and for how long. "At the same time I think we had a little bit of foresight when this thing first happened that we may have to alter some plans and do some things, which gave us some time to think `If this, then that.' We started to get some guys enough reps early on that I think it's going to help us come Monday night.

"We do have some guys that have played football for us. There's some youth in the two-deep, but if you look at it guys like Marcus Robinson and [Micanor] Regis and Andrew Smith and [Ramon Buchanan] Buck, JoJo Nicolas, Vaughn [Telemaque], those guys have all played a lot of football for us. They'll have to carry us through."

Eight of the 11 players slated to start Monday's opener for the Canes do have starting experience. Those guys are: safeties Jojo Nicolas (18 starts) and Vaughn Telemaque (24 starts); cornerback Brandon McGee (1 start); linebackers Ramon Buchanan (12 starts) and Jordan Futch (2 starts, 16 career tackles); defensive linemen Andrew Smith (7 starts), Micanor Regis (10 starts) and Marcus Robinson (11 starts). But still, when you look at the team's depth chart, there is clearly a lot of inexperience.

At cornerback, where fifth-year senior Mike Williams (0 starts, 18 career tackles, 4 pass deflections in 14 games at Wake Forest) will start opposite McGee (a junior with 17 career tackles and two pass deflections in 21 games), the backups are senior Lee Chambers (a converted running back who made two tackles on special teams last year) and true freshman Thomas Finnie.

At middle linebacker, sophomore training camp standout Jimmy Gaines will call out the plays in Spence's absence. But Gaines comes in with one assisted tackle and six games of experience as a true freshman. The backups at linebacker: junior C.J. Holton (12 career tackles in 25 games) and true freshmen Gionni Paul and Denzel Perryman.

On the defensive line, where three starters will sit out, Robinson, Regis and Smith provide plenty of experience. But big 6-2, 360-pound defensive tackle Darius Smith, who is expected to start next to Regis at tackle, is one of four players on the two-deep on the defensive line that hasn't taken a snap at the Division I level. The others: freshmen Anthony Chickillo, Olsen Pierre, Jalen Grimble and David Perry.

A scary, nightmarish scenario? "It is," D'Onofrio said of the youth and inexperience on UM's defense. "But I haven't been in many ideal situations over my career. I coached eight years at Rutgers and Temple off the bottom with 53 scholarship players at Temple and everything else. I'm not used to exactly having everything at my disposal. I'm just prepared for these type situations, really don't worry about what happens - just coach the guys you can coach and play ball."

If anything has helped, D'Onofrio said, it's that the team has spent a lot of time preparing for possible situations when leaders might be out on offense and defense. Remember those days in camp when Spence, Vernon and Ray-Ray grabbed a ballcap, whistle and coached? That's what Golden had his team preparing for.

So what will D'Onofrio's overall message to his defense be Monday night? "Just be who we want to be," he said -- regardless of who is missing.

"From the get-go when we got here we talked about turning on the tape and seeing a group that really played with a lot of passion, energy, played tough, playing for one another, a group that loved one another," D'Onofrio said. "Really that hasn't changed, and we need it moreso. We need some guys to step up. I'm excited about the guys who have their opportunity, am excited to watch them play."

OTHER NEWS AND NOTES FROM THURSDAY...

> After battling a few minor injuries, freshman defensive end Anthony Chickillo appers to have settled into one spot.

"We had him working both of our defensive end spots, which are a little bit different," D'Onofrio said. "We're asking guys to do different things on those spots, trying to find the right combinations. He had a couple injuries, a couple things inbetween. For him to get the continuity, it wasn't really smooth. But I think he's got it back now and is headed in the right direction."

> Maryland quarterback Danny O'Brien was the ACC Offensive Freshman of the Year in 2010 after throwing for 2,438 yards along with 22 touchdowns and eight interceptions. When looking at film on O'Brien, D'Onofrio said he impressed by the poise O'Brien plays with.

"Anytime you can come in that young and play that well and poised, it's a probably a kid who has done it all his life," D'Onofrio said. "He's probably a kid that got the ball when he was 8-years old and could do it. Those guys are rare and special. Some of those quarterbacks just have it, can see the field, make the checks, are smart, see it quick, can make a good decision. He's got all those intangibles."

D'Onofrio said the key for UM will be trying to make Maryland's offense -- which also has talented tailback Davin Meggett -- one dimensional.

"They have a veteran offensive line, four or five starters back. The tight end's a very good player and obviously [Davin] Meggett at tailback, he averaged almost six yards a carry," D'Onofrio said. "When a team is two dimensional and can throw it, you have to figure out a way to get the run stopped and make them one dimensional. I don't think it's any secret. Every defensive coordinator talks in those terms. There is challenges. They have veteran wide receivers, don't have a lot of guys back that had the number of catches but have been in and around the program for three and four years. So I expect them to be a huge test for us."

> Asked to comment on senior linebacker Ramon Buchanan, D'Onofrio said he "has stepped up quite a bit. He's really been a guy that's being consistent. He's bringing intensity, enthusiasm, great effort to practice every day. That's what I'm excited about - the consistency. Not high one day, low one day. He's really been consistent."

> Of freshman defensive lineman Jalen Grimble's play in camp, D'Onofrio said: "Jalen's been good. He's talented. He's played two sports for us. We're trying to figure out the best combination. he's played some end, played some tackle. We're kind of settling him in right now inside. These guys are all getting better right now over the last 10 days or so when we kind of moved forward, figured out we have to get some of these guys ready to go, get them in one spot [and] honed in on a game plan. I think we've improved a lot."