Kevin Grooms, UM's only RB signee in 2011, has Friday flight scheduled to Marshall according to coach

CORAL GABLES -- South Broward running back Kevin Grooms, one of the most highly-touted freshmen in UM's 2011 signing class, is likely heading to Marshall and not the Hurricanes backfield. 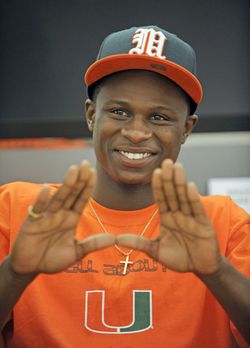 Grooms, at two-time All-Broward selection who ran for 1,363 yards and 20 TDs as a senior, has been battling NCAA Clearinghouse issues since signing with UM in February. His qualifying test score was red-flagged by the NCAA.

Groom's high school coach Allen Held told The Miami Herald this morning the 5-10 pound, 170-pound speedster already has a 5 p.m. flight scheduled Friday to fly out to Marshall if his issues with UM aren't cleared up.

"He's been trying to work things out with UM, but they want to send him to a junior college and just don't have anything set up for him yet," Held said. "Virginia Tech told him they could put him in a prep school. But it looks like Marshall is the best situation. They can put him in a program, have him sit out the year and then play in 2012."

Grooms was the only running back UM signed in its 2011 signing class. The Canes have one of the nation's top high school running backs in Miami Norland's Duke Johnson already lined up for the 2012 class.

UM coach Al Golden said Friday the school would know later today if Grooms and two other signees dealing with clearinghouse issues -- defensive end Corey King and linebacker Antonio Kinard -- would be getting into school.

UPDATE: Grooms told Canesport.com about 10 minutes after this blog was first posted: "It's just between Miami and Marshall right now. I don't know which one I'll choose."

Despite what he told Canesport, it's still a safe bet Grooms will not be a Hurricane this season.