Tonye Jekiri, a 6-10, 220-pound senior center at Hialeah Champagnat, committed to the University of Miami on Monday morning, giving new Hurricanes coach Jim Larranaga a big man for the future he sorely needs. 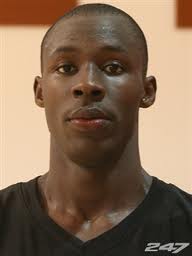 Jekiri moved to South Florida from Nigeria in Sept. 2010 and hasn't been playing basketball very long according to Champagnat coach Danny Serrano.

"But he's got a huge upside," Serrano said. "From the minute that school started I was getting phone calls from Miami, Virginia Tech, Clemson, George Mason, Alabama, Florida State, Auburn -- name it they were all after him.

"He's a legit 6-10, but a gazelle. I think this is his fourth year of playing organized basketball, but he's come an unbelievable ways and still has an unbelievable upside. That's why these schools have been so desperate to get him. Apparently, though, his visit with Miami over the weekend was so good he verbally committed."

"He's just so quick. He runs like a guard," Serrano said. "He's such an imposing figure under the basket defensively. He's real good on the help side. Offensively, he has nice a 10- to 12-foot midrange shot. He can play with his back to the basket or facing the basket. But his gift is how well he runs the floor."

Jekiri played for Florida's Team Breakdown (AAU) over the summer. That's where Serrano said he made his biggest strides.