« Tale of the Tape: How do you measure 2011 Canes? | Main | Canes' commitment Malcolm Lewis has Miramar 3 wins away from 2nd state title »

Golden wraps up season, looks ahead

CORAL GABLES -- UM coach Al Golden spent 35 minutes Monday morning wrapping up the 2011 season and looking ahead to the 2012 season. For your listening pleasure, here is the audio of the complete press conference.

As for what Golden talked about, here are some highlights/notes: 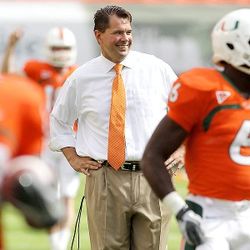 > The team began its off-season weight training program Monday and Golden said its vital the team gets stronger heading into 2012 because "there's too many times on the field we're getting pushed around."

"We have to get that fixed," Golden said. "As I said to the staff yesterday I think there's a blessing that we're not going to a bowl because we can fix our strength and size at the point of attack. Hopefully we can do that over the next seven weeks.

Is he unhappy with strength coach Andreu Swasey?

"I believe in coach Swasey, think he's one of the best," Golden said. "It's a function of the culture. We're vastly improved from where we were last January. We need to get stronger, educate the kids a little better on dietary and nutrition choices. You can't go out there and play with 208-pound linebackers and think that's okay. We're playing teams that are 230, 245 pound linebackers. I want a big, strong, powerful team. It's not just Swasey - get them bigger. There's a shift in the type of size and strength we want to be. There has to be a culture here on strength and conditioning."

> Golden said he will try to meet every player before they leave campus, but adds it will be a little difficult because of the recruiting schedule. As for his underclassmen, considering the NFL Golden said: "If there's decisions to be made, most of it will be done privately.

"We'll take each kid, make sure they get the paperwork filed, make an educated decision. What they have to do right now is make sure they're getting the accurate information, not hearing from runners, guys on the street. We're so far away from having an accurate evaluation on a lot of those guys that it's premature."

> Golden became most animated when asked about if he thought he deserved a contract extension after a 6-6 season.

"You keep talking about a six-win season like nothing else occurred," Golden said. "This is the craziest year I think on record. The adversity we endured - this is about our program moving forward. I think the university understood the undertaking we had. I'm real proud of the staff and student athletes. 6-6 not good enough for you? It's not good enough for me. We'll get it fixed."

"The irony is there's never been more instability or controversy than what we encountered this year. To have [a commitment] from the university is great. My intention was to be here, the head coach here. There were some in the media and outsiders who thought I was going somewhere else, looking for another job. The circumstances we inherited were unfortunate, but I wouldn't be here in front of you if [they weren't going to be overcome]."

Golden later said he told his wife last year before taking the job his aspiration was to coach at UM for the long haul. UM hasn't had a coach last longer than 6 years over the last 30 years.

> As for the NCAA sanctions, Golden maintains that from what he knows "the worst part is behind us. But he also said later that he is "out of the loop" and doesn't know when UM will hear from the NCAA regarding any future sanctions.

"From what I know, I've signed on because I think we're moving forward," Golden said. "We sat kids, had them reinstated, [gave up] a bowl game. That story didn't end for us in terms of suspensions, what all that adversity created, we were dealing with it every day. What our lineup would be, get a guy injured -- we dealt with it all year. I'm proud of the way our guys dealt with it. From what I know we're moving forward.

"... From what we understand now, this puts an end to this chapter. We move this forward. We'll face it. It's not going to be anything compared to what we faced at Temple."

Asked how important is it for the offensive and defensive coordinators to be with the program over the next four or five years, he said: "It's critical that we retain coaches, make this a destination job for everybody. We believe it is. We're excited about what we're doing moving forward. As soon as I'm done here I go out recruiting, a big class I'm bringing in, and I fully anticipate our coordinators to be here moving forward."

Golden added he will sit down with his assistants before the holidays and "communicate with them what the expectations are and if they were deficient in a certain area."

> Golden said there are a lot of areas the Canes improved on the field this season, but adds the team is still a long way away from where he wants it.

"We have a baseline," Golden said. "We're plus 85 in penalty yards per game, plus 63 in number of penalties per game. So we're halfway home. We go from 36 turnovers to 19 this year, from 27 interceptions to 11 interceptions. We're halfway home, have a long way to go. We're plus 10 in punt returns, plus 7 in opponent's starting yard line on kickoffs, plus six in kickoffs. I can go on and on.

"We've made a lot of progress, need to continue to make progress. We need to be a tougher team, a stronger team, and we need to have depth. It's hard to compete for a championship if you don't have the depth. I think we got worn down at the end of the year, didn't have the depth. We have to have the symmetry that when a corner goes down he's replaced by a corner, not a safety that moved to corner."

"We didn't take the ball away enough. We didn't flip the field enough," Golden said. "Sometimes teams got multiple first downs before we stopped them. I thought we were very good in the red zone on defense, but sometimes you have to take the ball away before that. There are still areas we can improve in the kicking game to create a shorter field for our offense. It makes it hard when you're backed up all the time. Our time of possession has a lot to do with that number. Our yards per play was good, is what we're looking for. But for us to get up to that 72 number, even 75, you're talking 400 yards. Clearly we didn't execute as well as we had to down the stretch."

> At the midway point of the season Golden said his defense was about as simple as it could be. But as the year went on, Golden said Monday, Mark D'Onofrio was able to get more complex -- a result of veteran players returning from suspensions and younger players growing up. Golden said the defense only gave up 14 points a game over its last six games.

"We had a lot thrown at us this year on the defensive side, just never had the same lineup until about week 7 or 8," Golden said. "So we settled down toward the end, started to play better defense. The team winning or losing is not just a function of defense; it's a function of everybody. I'm encouraged. 32 points is our margin of loss right now. We're going to get a jump on that here today."

Golden said he would like for his corners to play more aggressively in the future and admitted the reason played so much zone was because of personnel. Of the team's six interceptions on defense, Golden said: "That's not championship football."

Needless to say, cornerback is a big need in recruiting. "What we can't do is screw up in this class," Golden said. "Certainly quarterback, cornerback and the secondary in general, we need guys there. When I got here last year we basically had Brandon McGee at corner and that was it. I didn't walk in the door and expect to have one corner on the team. We had a lot to deal with. I know exactly where we're at and what we have to do. We had a plan to handle it. We moved Lee [Chambers] to cornerback, got Mike Williams, moved JoJo [Nicola] out there and on Aug. 15 had to move him back to safety. We had a lot to overcome.

"We have a great opportunity for corners, a great opportunity for linebackers. We don't have the depth - otherwise we wouldn't have been moving Marcus Robinson back and forth all year. And at wideout we don't have enough in the spring to line up at wideout. We need guys that want to come in and compete." As for recruits whose commitment is "soft", Golden said: "If they're looking, we're looking."

> Golden said he anticipates two other quarterbacks being here by Jan. 17 and having four quarterbacks in the program who will compete in spring football. "I think Stephen [Morris] made a lot of progress this year, has benefited from learning and growing and developing alongside Jacory, learning the system without having the pressure to produce week in and week out," Golden said. "There's something to be said for that. He's gotten better during the year. It's going to be great to see him, Ryan [Williams] and two kids we bring in mid-year compete."

In what ways did Morris make progress this year? "In every way. His understanding of the offense - he became more of a leader, more confident in terms of audibling," Golden said. "He made very confident throws. Against Duke he throws a rocket. He's stronger, is going to be a great runner for us, is legitimately fast, 4.5, 4.6. He got better at throwing fade balls, touch passes - has some work to do there yet. He's benefited from just putting his head down and working."

> Golden said he anticipates defensive tackle Adewale Ojomo will be back, but adds he'll have to go through an NCAA process to acquire a sixth-year of eligibility. Ojomo said two weeks ago he was having trouble finding medical paperwork for his freshman season in 2007, not the 2009 season he missed because of a broken jaw.

> Golden said the team will be hosting recruits over the next two weekends, but expects to be at high school state football championships Dec. 15-16.

"We're still evaluating a lot of kids because there's a lot of kids out there that give us great value," Golden said. "We just got a couple of commitments that are great players. They may not be five stars, but we have conviction on how they play the game, what kind of student-athletes they are. Not only are we recruiting, making sure we hold on to kids committed, we're also evaluating. It's a challenge to do that."

> As for the scout team players that stepped up, Golden said: "Dallas Crawford grew up a lot. Eddie Johnson kind of grew up as the season went on. I thought Gionni Paul grew up as the season went on, especially as of late. He just didn't get an opportunity to play as much. I think Corey King is really doing a nice job in growing up. There's a good group of kids there that are good, hard workers."