UM's No. 1-ranked recruiting class of '08 failed in its quest; now it's all about the Golden process

It wasn't supposed to be this way. 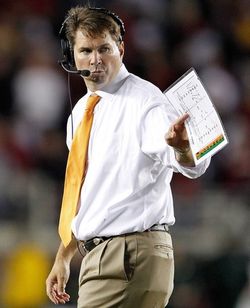 When the nation's No. 1-recruiting class walked through the doors in 2008, the Miami Hurricanes were supposed to return to prominence. Randy Shannon, the man tapped into South Florida's recruiting pipeline, was supposed to restock the shelves with the talent Larry Coker let escape under his watch.

Winning? That was supposed to come quickly.

With two games left in Al Golden's first season as Canes coach, UM is still sputtering, struggling to play better than .500 football. Are they folding like Shannon's Canes? Nope. Not even close.

Golden and his assistants have gotten more out of this group than Shannon ever did. Tommy Streeter, no where to be found under the old regime, has become a star. Jacory Harris is no longer an interception machine, rather one of the most efficient passers in the country. Sean Spence? Even better than he was his first three years, even wreaking havoc at middle linebacker when they've smartly used him there.

But the overall results for this group of 32 signees in 2008 who were supposed to save the day? Not very pretty.

A few of those kids have shined individually:
> Brandon Harris, a second round pick of the Texans who left school a year early, was an All-American cornerback.
> Spence, considered the 11th-best player for UM in that recruiting class by Rivals.com, will go down statistically as one of best Canes linebackers ever.
> Streeter, who did nothing his first three years here, has the potential to be a first round pick.
> Travis Benjamin became just the sixth player in UM history this past Saturday to eclipse the career 2,000-yard receiving mark.
> And Jacory Harris, for all his interception woes, will likely finish second to Ken Dorsey in all the major career passing stats.

Some turned out to be decent starters and contributors:
> Linebacker Ramon Buchanan, out for the season with a knee injury after just four games and could return next year, has 106 career tackles, 13.5 for loss in 39 games.
> Vaughn Telemaque, once compared to Ed Reed by Shannon, is a three-year starter at safety with 152 career tackles, 5 fumble recoveries and 4 interceptions.
> Defensive end/linebacker Marcus Robinson has 14.5 career sacks and 102 career tackles.
> Defensive tackle Micanor Regis has 101 tackles, 14.5 for loss, 3 INTs in 43 games.
> Receiver LaRon Byrd, who has struggled to get on the field his senior season, has 100 career catches for 1,179 yards and 6 TDs.
> Defensive end Andrew Smith, a 2-star recruit coming out of high school, turned out to be a decent third-down pass rusher (49 tackles, 8 TFL, 4 sacks).
> Junior College signee Pat Hill had two decent years opening holes as UM's fullback.
> And kicker Jake Wieclaw, once considered a mistake by coaches, has finally worked his way into the kicker's job after Matt Bosher left.

But so many of those 2008 recruits turned out to be busts:
> Arthur Brown, the No. 1 linebacker in the country and recruit in UM's 2008 class, did nothing in two years at UM. He's now a starter at Kansas State.
> Marcus Forston, the other 5-star recruit in UM's 2008 class, has had two seasons cut short by injuries including this one. But he's still made just 60 tackles, 7 sacks in 31 games.
> Jordan Futch -- a kid with a great attitude and a lot of heart -- didn't crack the starting lineup until this year. He has 36 career tackles in 31 games after being tabbed as the fourth-best player in the class.
> Aldarius Johnson, the No. 1-rated receiver in UM's 2008 class, has done nothing since his freshman year and got booted off the team in August for allegedly lying to NCAA investigators about the impermissible gifts he received from Nevin Shapiro.
> C.J. Holton? Davon Johnson? Ben Jones? Jeremy Lewis? All four-star recruits who have never cracked the starting lineup or done much outside of mop-up or special teams duties.
> From the Where are they Now Department: Joe Wylie, Thearon Collier, Antonio Harper, Gavin Hardin, Cannon Smith, Taylor Cook, Brandon Marti, Zach Kane and C.J. Odom.
> And we're all still waiting to see when Kendall Thompkins -- practice superstar -- does more than just help out on special teams. Fullback John Calhoun is a nice kid. Not much to say beyond that.

The reason I bring all this up -- this recap of ups and downs for what in essence is UM's senior class -- is to try and clear up why I think the Canes (5-5) are still stuck in this muddle of mediocrity even whileGolden and his staff have done a better job than the previous staff. Two reasons are depth and talent. UM simply missed on too many recruits the last few years. Another, is the mental makeup of the kids who are here. When the tough has gotten going, they've simply cracked.

"We have some bad habits that surface during pressure situations that we have to fix," Golden said of his team Sunday. "It is frustrating, but at the same time it's part of the process. We just have to stay with it. The kids have to continue to be willing to make the changes necessary."

That's the frustrating thing with these Canes. They've had three to four years to break those bad habits. This 2008 group -- and the one that came in right after it in 2009 with Ray-Ray Armstrong, Lamar Miller, Brandon Washington, Brandon McGee, Dyron Dye, Mike James and Olivier Vernon -- has just always found a way to blow close games.

The same problems always arise. Poor tackling. Freelancing. Blown coverages. Brain farts. Jacory Harris always seems to make a bad decision near the end zone. Travis Benjamin runs the wrong routes at Ohio State then chases after a punt that's past him at Florida State. Ray-Ray? Forget that he's always out of position because he tries to make too many plays. How does anyone get in trouble off the field again after they've already served a four-game suspension for doing something similar to what they got into trouble for the first time?

But to me, it feels like the process is going to take awhile. Until this group leaves and new ones with a different late-game DNA come in, it really won't change. Golden has tried hard to change the culture. He's tried to get his team up for every game. But the woes just seem embedded in some of these guys.

In the end, you can't be an ACC or national title contender when you can only hit on 40 percent of what is supposed to be your senior class. Golden has to do better than what Shannon did in recruiting. He has to land quality backups.

And he has to continue to change the off the field culture. You can't build consistency when some of your best players are getting suspended for doing really dumb things (Ray-Ray, Regis, etc). All of that in the end is why I believe this team is 5-5. There's just a lack of depth in too many places (corner, safety, linebacker). And the football IQ just hasn't gotten better.

Golden has gotten this football team -- which has been smacked hard by distractions -- to improve dramatically in a lot of areas. Despite Saturday's nightmare performance, UM has improved on special teams. Same with penalties. Offensive coordinator Jedd Fisch has worked wonders with Harris and UM's offense, which before Saturday was No. 1 in the country in efficiency. Miller became the school's first 1,000-yard rusher since 2002. Sean Spence is having an All-American season. Freshmen Denzel Perryman and Anthony Chickillo have shown us they will be stars in the future. And Golden has 26 commitments and a consensus Top 10 recruiting class lined up for 2012.

But don't let your imagination wander into the danger zone of unreal expectations. Don't start believing championships are right around the corner. We're still talking about a 5-5 football team that will face scholarship reductions and bowl-bans once the NCAA's investigation into this Shapiro fiasco is completed. We're talking about a 5-5 football team that next season will be without any of those good seniors I mentioned earlier -- and maybe some of those underclassmen too. That's the football team somebody -- hopefully Golden -- will be putting on the field next year.

So, dig your heels in. As Al says, it's a process. One that is going to take some time.