« What will Canes 2012 depth chart look like? Here's my best guess minus Lamar Miller | Main | Ray-Ray Armstrong will return to UM for his senior season »

Duke Johnson a special weapon in waiting for UM

PALMETTO, Fla. -- Maybe it's silly of me to say this since I'm supposed to be objective, but man is it fun watching Duke Johnson run the football. 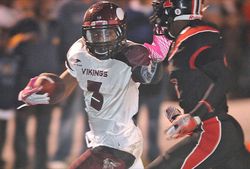 Last night, I got a chance to watch the Miami Norland senior and University of Miami commitment up close as he rallied his team from a 20-0 deficit to a 35-27 win over the Palmetto Tigers in a Class 5A state semifinal game. Duke, widely considered the best player in the state (somehow he didn't win Florida's Gatorade Player of the Year), finished with 375 yards rushing and 3 touchdowns on 27 carries by my count.

It was a career night for Johnson (5-10, 180), who finished 44 yards shy of tying Frank Gore's record for rushing yards in a game. Afterward, he told me he had Gore's mark of 419 on his mind, but with his team nursing an eight-point lead in the fourth quarter he was more concerned about running out the clock. By the way, he also punted and finished the game on defense as Norland's defense held on late for the win.

Johnson reminds me very much of Gore in terms of speed, explosiveness, vision and toughness. Coaches in the area who were on the sideline and had never seen Johnson play until Friday were blown away by his stiff arm. It's impressive.

The Hurricanes of course still have Lamar Miller. He hasn't announced he's going pro yet (although many expect he will considering he's been tabbed by experts to be the 2nd best running back in the country behind Alabama's Trent Richardson). If Miller leaves, the Canes still have senior Mike James, junior Eduardo Clements and sophomore Darion Hall all available to carry the rock. But assuming Johnson signs with Miami -- and there is no reason to believe he won't -- it's impossible to imagine he won't get plenty of touches. He's simply too gifted.

I don't have all his highlights from Friday night at Palmetto. But we did get what I thought was his most impressive run of the night on film -- his 32-yard touchdown run in the third quarter. In the highlight, Johnson powers through the line of scrimmage and barrels over Palmetto linebacker Da'Quall Randal, who by the way is 6-foot, 230-pounds. Randal keeps a souvenir as Johnson slams past him -- Johnson's shoe. The running back, however, isn't affected by it and still outruns the Palmetto secondary into the end zone.

Like I said, maybe I've got a man crush on Duke Johnson, but the kid is special.

By the way, Johnson was approached by Gators fan after the game who told him 'Please come to Gainesville.' Johnson laughed it off and responded: "No way, bro."

Norland (14-0) plays in the Class 5A state title game next Friday at The Citrus Bowl in Orlando at 1 p.m. against Crawfordville Wakulla (12-2).

Johnson, who has only played about a half in most of his games because they've been blowouts, has run for 1,957 yards and 25 touchdowns on 197 carries. He's run for 800 yards and 10 of those touchdowns in the playoffs.

Here is his post-game interview