ORLANDO -- It wasn't the greatest performance of his career -- far from it actually. But even on a day he fumbled and threw an interception, Duke Johnson was still pretty special in his final game in a Norland Vikings uniform. 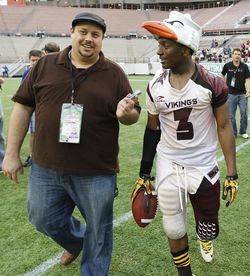 He turned in 266 all-purpose yards, five touchdowns and an MVP performance in leading Norland to a 38-0 win over Crawfordville Wakulla in the Class 5A state championship game Friday afternoon at the Citrus Bowl. (P.S. -- Don't mind the fat guy interviewing Duke after the game. Herald's Al Diaz shot it.)

"Today it was totally his show. Whether it was a run, a catch, a straight on return, you don't get any better than that. He's by the far best we've seen in the state this year," said Dwight Thomas, who coached a guy you might have heard of -- Hall of Famer Emmitt Smith at Pensacola Escambia High.

"That stuff he does where he's here one second and then over there the next, you can't emulate it. He's special."

Norland (15-0) probably could have beaten the overmatched War Eagles (12-3) without Johnson (5-9, 182). But the Vikings -- ranked eighth nationally by ESPN -- certainly would not have completed the climb to the crown without him.

Two weeks ago at No. 1-ranked Glades Central, a place no Miami-Dade or Broward team had won in 14 previous playoff trips, Johnson ran for 230 yards and four touchdowns. A week later, he posted the fourth-highest single game performance in Miami-Dade history, rallying his team from a 20-0 deficit at Palmetto by rushing for 375 yards and 3 TDs in a state semifinal win.

All Johnson did Friday was prove to a statewide television audience that hadn't seen him yet beyond grainy YouTube highlights is that he's not only the best present University of Miami coach Al Golden has under his Christmas tree, but one of the best players Dade has ever produced.

"To me, I once thought Duke was the most exciting player I'd ever seen," said Norland athletic director Ira Fluitt, a basketball star during his old playing days at Miami Springs. "But after what he did last week in running for 375 yards I think he's the best player I've ever seen. I'd put him right up there with the greats like Frank Gore, Elvis Peacock and Troy Davis."

Johnson, the state's Class 5A Player of the Year and a finalist for Florida's Mr. Football Award, gave Wakulla's defense credit for making him work for 130 yards on 21 carries. It wasn't until his final carry of the game -- a 40-yard touchdown run with 6:12 remaining where he stiff armed three defenders on his way to the end zone -- that Johnson was able to break a run longer than 15 yards.

Still, he displayed his big play ability plenty. He returned a kickoff following a safety 69 yards for a touchdown early in the second quarter, hurdling over and spinning off would-be tacklers in impressive fashion. Later in the fourth quarter, he leaped over two defenders to haul in a 23-yard pass at the Wakulla 2-yard line. It setup his three-yard TD run two plays later.

"Blocking for that guy has been a lot of fun," said Vikings left tackle Ereck Flowers, a 6-6, 315-pound wrecking machine who will follow Johnson to UM. "He's a beast."

Norland coach Daryle Heidelburg said Golden and UM are getting a player "that refuses to lose" and "is going to do what it takes to build that program and help other players around him." Heidelburg said Johnson and linebacker Feddie Davey performed "bed checks" of teammates Thursday night before he could get to it himself.

Johnson wore special black and gold socks and gloves Friday to honor Liberty City Optimist founder, Sam Johnson (no relation), who passed away last Sunday from a heart attack. After the game, he returned to the Vikings bench to find a hat sporting the beak of Hurricanes mascot Sebastian the Ibis waiting for him and put it on.

His mom, Cassandra Prophet-Mitchell, who sat between UM assistants George McDonald and Terry Richardson for most of Friday's game, said there is no other place her son is going but UM.

"Can't wait to get there," Johnson said when asked if he's already thinking about the Canes.

But first, he says, "I'm resting for the next month. Then, it's track season. I want got to get faster."