When it comes to producing quality talent at linebacker, few have as good a track record lately as Corey Johnson, the linebackers and special teams coach over at Stephenson High in Stone Mountain Ga. 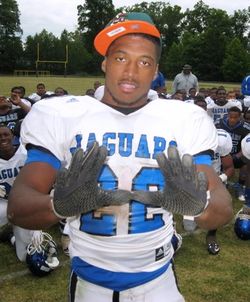 The 40-year old assistant has sent 19 of his linebackers to Division I schools over the past nine years including three who are currently in the NFL. They are: the Bills' Kelvin Sheppard (played at LSU, third round in 2011), the Redskins' Perry Riley (played at LSU, fourth round pick in 2010), and the Patriots' Jermaine Cunningham (played at Florida, second round pick in 2010). Johnson said he's confident he'll have another one headed to the NFL soon -- Hurricanes early enrollee Raphael Kirby.

Kirby, a U.S. Army All-American and one of seven players to sign with UM and begin taking classes last week, has all the tools according to Johnson to play right away and make an immediate impact.

"I think he's going to walk in and start right away. He's a four-year starter in my book," Johnson said of Kirby, who had 122 tackles, 20.5 sacks, 26 tackles for loss, three forced fumbles and fumble recoveries and an interception return for a touchdown for 9-2 team that was upset in the first round of Georgia's state high school playoffs.

"A lot of times you get guys who kind of get stuck because of the changes to the formation or scheme. He's well versed on football, an extremely good athlete, very bright kid, quick learner. All of those things make him an asset to Miami.

"We ran both the 3-4 and 4-3 at times. We've got coaches who have played in college, a few had pro experience. We do a good job preparing the kids on what to expect at the next level. The system we run is pretty comparable to a lot of schools because we run college type defenses. That's why a lot of scouts spend time at our school. They know our kids are ready. The fact he's already down there, learning the system, he's going to learn what they do quickly. I can tell you this -- the last three years we've sent six kids to school early and all of them have played early."

Kirby, who played mostly middle linebacker and and at times weakside linebacker for Johnson, is listed at 6-foot, 208-pounds by Rivals.com and 6-1, 215 pounds by ESPN.com. So how big is he really?

"He's bigger than that," Johnson said. "He's more like 6-2, 220 pounds. He's got a nice frame too. As far as what he can work on, I'd say pass coverage, body control. But in terms of run play, strength and size, I think he has all that now. He's a guy that can run with running backs. He has all the tools. I think he's going to go into practice, learn the plays and get playing time as a freshman."

Johnson said Kirby, who was rated the fifth-best outside linebacker in the country by Rivals.com and 13th best by ESPN, had more than 30 scholarship offers by the time he began playing his senior season. Johnson said Kirby thought about straying from the Canes and going to the same school with his best friend and teammate Darreon Herring (a linebacker headed to Vanderbilt), but said Kirby opted to stick with UM and ultimately chose them over Vanderbilt, Georgia, Florida and South Carolina.

"He pretty much had the same opportunity to play right away at Vanderbilt and South Carolina, but he really liked UM and what Coach [Al] Golden was selling," Johnson said. "He's a unique kid. He's going to do well on special teams, be all over the place for them. Miami got a four-year starter."

> With a little more than a week left before National Signing Day (Wednesday, Feb. 1), UM has seven players already enrolled (their scholarships count backward, toward the 2011 class) and 24 other players committed to sign as part of their 2012 class.

Of the 24 players committed to sign next Wednesday, two appear to be hedging -- Miramar receiver Malcolm Lewis, who will take a trip to UCLA this coming weekend according to his coach and Jacksonville First Coast linebacker Reggie Northrup, who took a trip to Florida State last week and will visit Ohio State this coming wekeend. Both are considered among UM's Top 10 overall recruits.

> UM will get a visit from highly coveted All-American cornerback Tracy Howard of Miramar High this coming weekend. Odds are though Howard will opt for Florida or Florida State. He will announce his decision at 9 a.m. next Wednesday on ESPNU.