Despite always being a profoundly good left-handed hitter for average and very good defensively, Cardinals outfielder Jon Jay said he's never played on a team where he's been the best or even the second-best player in the lineup. 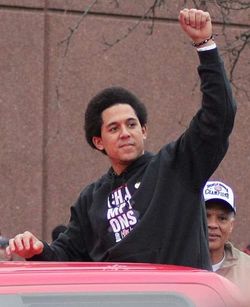 "But you don't always have to be the best to be successful. You just have to believe in yourself, work hard and good things can happen for you. I've been very blessed."

A lot of good things have certainly happened for the 26-year old Miami native who recently became engaged. After leading Columbus to its first baseball state championship in 2003 and earning All-ACC First Team honors at UM, Jay helped guide the Cardinals last October to the World Series in just his second big-league season.

Now, he's hoping to give back some of the good fortune he's received by hosting a charity bowling tournament featuring other major leaguers with local ties Saturday night from 6 to 9 p.m. at Lucky Strike Lanes in Miami Beach, 1691 Michigan Avenue.

"I've done a lot of [community service] during the season when I've played in St. Louis and when I've come home I've visited homeless shelter and hospitals before. But I wanted to do an event where I could give the money to charity and have it be a community thing with the guys down here who are sort of the next generation in the big leagues."

Jay, who scored the tying run in the bottom of the 10th inning on Lance Berkman's two-run single with two outs in the Cardinals come-from-behind win in Game 6 of the World Series, got a chance earlier this month to shake hands with President Barack Obama when the Cardinals were invited to the White House.

"It was crazy man and a lot of fun," Jay said of St. Louis' run from 10 1/2 games out of a wild card spot heading into the final month of the season to winning it all.

"It's going to be a lot different with [manager] Tony [LaRussa] leaving and then Albert [Pujols]. But when you look at our roster I still think we have a great team. We have Matt Holiday and Lance Berkman and Yadier [Molina] who is one of the best catchers in the game and we got [Rafael] Furcal back. I mean we played the whole season last year without Adam Wainwright. People don't realize how important he was our team. I mean the guy won 20 games. So we're getting him back and Jaime [Garcia] is coming back. The whole team is pretty much coming back except Albert. Our bullpen has some good young guys who are coming back. I think we're all excited about coming back."

The Cardinals, who share their spring training facility in Jupiter with the Marlins, will open the season at the Marlins new ballpark April 4.