« ACC's plan once Pittsburgh, Syracuse join bumps conference schedule up to 9 games in football | Main | Reggie Johnson is the reason Canes have rallied to get in March Madness discussion »

CORAL GABLES -- Normally, interviews at the University of Miami prior to the start of baseball season begin with the same question for coach Jim Morris: Is this Hurricanes team good enough to get back to the College World Series? 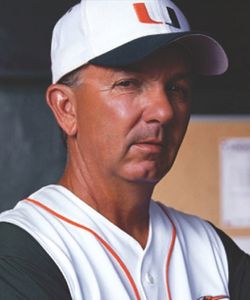 That didn't happen Tuesday. Morris, whose team opens the season a week from Friday at home against Rutgers, wasn't asked about Omaha until he was nearly done answering questions. Why did it take so long?

"Probably because a lot of our guys don't know where Omaha is -- except me and [sixth-year senior pitcher Eric] Erickson," Morris joked. "We haven't gone there much lately. We went there 11 out of my first 15 years and only once in the last five years. As a coach, you always feel you have a chance to go to Omaha if you play well. I think this club has a chance. That's all you want -- a chance.

"If we develop these guys and get a few breaks -- we've already had a couple with Eric and [catcher Peter] O'Brien -- we can get there."

The Hurricanes, who finished 38-23 and lost to national runner-up Florida for the third year in a row in regionals, have reason for optimism.

"It could be as good as any rotation I've had since I've been here," Morris said. "Ewing won [eight] games last year. [Whaley] was our No. 1 guy for most of the year. B-Rad ended up our No. 1 guy. Those are good, quality guys. That's important for us because we're not going to score that many runs early."

"We just have to get our bullpen settled. Got to have those seventh, eighth, ninth inning guys set."

With left-hander Sam Robinson, right-hander Travis Miller and closer Danny Miranda, UM had a solid trio in the bullpen. All three are gone now and Morris said he has "two or three young guys battling" for reliever spots. So far, junior college transfer Eric Nedeljkovic, a right-hander, appears as though he could be the setup guy. "He has good stuff, is a good athlete and can do it," Morris said.

Morris said his plan is to develop the bullpen early in the season and that he won't let his starters go deeper into games just because relievers could struggle early. "We're going to give them the opportunity early," Morris said.

As for the Canes' lineup, that remains a bit in flux as well -- especially at the corner infield spots. Juniors Stephen Perez (.263, 0 HR, 31 RBI, 14 SBs, 15 errors) and Michael Broad (.248, 3 HRs, 31 RBI, 4 errors) are battling hamstring and knee and back injuries, but Morris said he expects them to be in the starting lineup at shorstop and second base respectively for the opener.

First base, Morris said, remains a three horse race between sophomores Brad Fieger (.280, 2 HRs, 29 RBI last season) and Scott Wiebel, and freshman Esteban Tresgallo. At third base, Morris said University of Florida transfer Tyler Palmer is competing with Wiebel and Fieger for playing time. "Whoever ends up hitting is who is going to end up playing at those corner spots," Morris said. "We're not getting a lot of offense out of any of those guys at the moment. And those are spots where you need offense."

SANTOS IN-LINE TO START IN CF

Morris said one person who is hitting the ball well this spring is redshirt freshman Julian Santos. The Miami Killian grad is leading the team in hitting with a .563 average in practices and has struckout just once according to Morris. Santos tore his left ACL and MCL two weeks before enrolling as a freshman and then tore his right ACL and MCL in his first game back last March.

"I never had a player work for a year to play and the day he's cleared to play he comes back and blows out the other knee," Morris said. "I remember calling him that night because I felt so bad for him. He told me it was just another bump in the road.

"When he came back this fall, though, he struggled. I told him 'Geez, you aren't making any progress, you better turn it up a notch or your not going to play.' I don't know what that did, but he came back this spring and was ready to play."

Morris said if the season started today Santos would hit leadoff and start in centerfield. The rest of his outfield? Morris said sophomore Dale Carey, who made that crazy SportsCenter Top 10 catch in the regional loss to Florida, junior Chantz Mack and senior Rony Rodriguez will split those spots, with Rodriguez likely to serve as the designated hitter when he's not in left field.

"Those guys are all hitting about .200 so far this spring," Morris said. "But they've proven they can hit before so they'll be fine."

Morris said Rodriguez (.308, 13 HRs, 44 RBI) will probably hit right behind or in front of O'Brien, the Bethune-Cookman transfer who hit .304 with 14 home runs and 69 RBI last season. Other than hitting Santos in the leadoff spot, Morris said he's not sure where anybody else will hit just yet.

> Morris said if Broad and Perez aren't ready to start the season, freshman Jarred Mederos would start at shortstop and freshman Alex Fernandez Jr. would start at second base. "Alex has improved a lot as a hitter since this fall," Morris said. "He's pitched good too."

> The Canes are ranked 13th in the USA Today/Coaches' Top 25 preseason poll. "I'm happy with where we're at," Morris said. "I wish I still had a vote. I really enjoyed voting in it. I'd get the scores on Sunday night and couldn't wait to send my votes in. I'm not sure who is voting now. They don't tell you."

> Aside from the players already mentioned, Morris was complimentary of junior catcher Alex San Juan and freshman catcher Garrett Kennedy. "San Juan has looked good, made some real progress," Morris said. "Kennedy is going to be a good player here."

> Morris said one thing he's noticed about Erickson is that "he's matured a lot."

"I'm sure at times he thought his career was over with after two arm surgeries," Morris said. "Then being forced to move to Tallahassee because that's where your parents live. That's like being forced to go you know where. You can fill in the blank. It's a been a long process for him. Then the process of getting your sixth year of eligibility that wasn't an easy to thing do, a lot of paperwork and a lot of time. But we're very excited for him."