CORAL GABLES -- If you based team MVP awards simply on points, rebounds, assists, steals, blocks and three-pointers you could make an argument for a handful of different players on what numbers-wise is a very balanced Hurricanes men's basketball team. 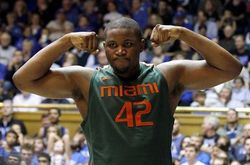 You could give the award to Durand Scott because he leads the team in scoring (13.1 points per game), assists (3.4) and minutes (34.9) and is averaging five rebounds a game.

Malcolm Grant has an argument because he's hit a number of big shots, averages 12.7 points a game and leads the team in three-pointers made with 44.

Florida transfer Kenny Kadji has played lights out in the post, averaging 12.6 points and 5.8 rebounds while leading the team with 35 blocked shots.

Even freshman point guard Shane Larkin deserves some consideration. His 37 steals lead the ACC and he's provided a big boost since being inserted into the starting lineup four games ago.

But if you throw out stats and look at overall impact, there is no question who the best basketball player at the University of Miami is. It's Reggie Johnson.

The 6-10, 293-pound center starred in Sunday's overtime win at then No. 7-ranked Duke. But his career-high 27 points and 12 rebounds in the Canes' first victory at Cameron Indoor Stadium isn't the only reason he deserves it (I'd give it to him for just flexing in the face of those Cameron Crazies after they taunted him by shouting 'Please Don't Eat Us'). It's UM's 9-3 record since his return that outweighs the 11.8 points and seven rebounds a game he's averaged since sitting out five months to heal from a torn meniscus in his right knee. That, and how good he's made his teammates since his return.

"Don't do anything for five months at anything you could possibly do, and you're going to be rusty," UM coach Jim Larranaga said. "Reggie came back and had an immediate had an impact. In Reggie's case, he not only plays well, but impacts the whole game and his teammates. If you look at Kenny Kadji's numbers, Kenny was averaging seven points a game before Reggie became available. He's been averaging about 17 points per game since Reggie has been back. Durand Scott was shooting in the low 30s when Reggie was not available. He's shooting 50 percent and above playing with Reggie."

Although Johnson said Wednesday he feels like he's close to getting back to 100 percent, Larranaga pointed out Johnson can only curl about 30 pounds with surgically repaired right knee (he curls 75 pounds with his left knee) and that Johnson's flexibility is "less than half" than the healthy leg.

"Until he has full strength and flexibility he will not be at 100 percent," Larranaga said. "That's not going to happen this season. It's going to take the spring and even the summer. When you sit out five months, it's been my experience it takes five months to recover from that."

"We were a zone team primarily last year. Now we're primarily a man to man. That puts a tremendous burden on him," Larranaga said. "A lot of teams ball screen and he has to get out there to get on ball screens. When you're in a 2-3 zone, you basically play in the middle and don't move around much.

"Anybody notice who switched out on [Duke's] Austin Rivers for the second to last shot of the game [Sunday]? Reggie Johnson. They ball screened. We were planning to switch. Reggie was there. Ryan Kelly got the rebound and Reggie was there on the perimeter. So, when you play in a zone, you're not asked to do those type of things. It's been a challenge for Reggie and he keeps getting better and better at it."

Despite the win at Duke, the Canes, who've won four consecutive game and five of their past six, are still hardly a lock to get into the NCAA Tournament. Even with an RPI ranking of 38, ESPN Bracketologist Joe Lunardi didn't include them this week in his projected field of 68. Jerry Palm of CBSSports.com had them as a 13th seed.

"I'm not surprised at all," Johnson said Wednesday. "I go into every game thinking were not in the tournament. We have to play one game at a time to get there. Don't get into your mind we're in the tournament because we beat Duke. That's false. One year, Virginia Tech beat Duke. Dick Vitale said they were in and that meant absolutely nothing. Virginia Tech went to the NIT like we did."

> Speaking of the Hokies (13-10, 2-6 ACC), they're next. Thursday night they'll visit BankUnited Center for a 9 p.m. tip, televised on ESPN2. With eight games left to play in the ACC, UM (14-7, 5-3) could conceivably finish 9-7 in conference play and still not make the tournament. So taking care of business against teams they should beat is top priority. And for Johnson there won't be any less motivation playing the Hokies, who are 2-7 since January 1.

"We don't like Virginia Tech, they don't like us. In the game, there's a lot of trash talking going back and forth," Johnson said. "They're the other school that recruited me in the ACC. They took [Victor] Davila over me, they're starting center. Every time I play them that plays in my head.

"They're 2-6. But I watched them when they played North Carolina and they can shoot the ball, they can drive. It was a close game going into the second half. They're record doesn't speak to what kind of team they really are."

> Despite what most people may call a breakthrough performance for Johnson at Duke, the big fella still believes his first game back Dec. 17 against FAU remains his best performance. "It was the most fun game for me. I was getting everybody else involved. I had a career high five assists. That's big for me. As a big man, I love assists."

> Johnson said he and several teammates have remained contact with former coach Frank Haith, now at Missouri through text messages.

"I texted him and told him good win against Kansas the other night," Johnson said. "I definitely keep up with Coach Haith. He's my guy. He gave me a chance to play in the ACC. I'm happy for him. They're No. 4 in the nation. At one point, they were No. 2 in the nation. I'm proud of him. I just want to see him succeed.

"His wife texted us after the Duke win. She said 'Good win and keep it going.'"

> NBADraft.net currently projects Johnson as the 42nd pick (2nd round) to Houston. But his stock could be on the rise following the performance against Duke, especially when you consider he looked better than Mason Plumlee, currently tabbed to go 24th overall to the Celtics.

"The Plumlees are probably highest on the NBA radar in the ACC when it comes to big guys," Johnson said. "Those guys jump, dunk, sky hook, whatever. It was real fun playing against those guys. Duke just guarded me a certain way and I took advantage of it."