CORAL GABLES -- The last thing Anthony Chickillo imagined when he signed with UM 13 months ago was that he'd become the voice of experience for the Canes' defensive front seven this quickly.

But after several questionable early departures for the NFL Draft, that's exactly what the 6-4, 261-pound sophomore defensive end is. 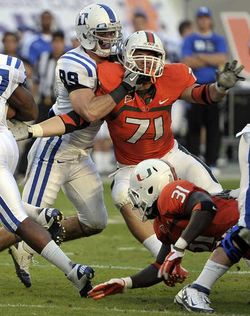 "There's no doubt we're going to have to grow up fast," said Chickillo, who made nine starts for the Canes last season, one of six players in the defensive front seven who have starting experience (Jimmy Gaines has 8 starts; Darius Smith 7; Kelvin Cain 6; Denzel Perryman 5; Luther Robinson 2).

"We have to be accountable for each other, push each other and make sure everybody is doing what they're supposed to be doing at all times. I thought coming in I'd still be learning from older guys at this point. But everything happens for a reason. I think I can anchor this defensive line and be one of the leaders of this team."

Leadership is something that comes natural to Chickillo. He said he's been a leader at every level he's played at. Last year as a freshman he deferred to seniors like Sean Spence and JoJo Nicolas. But this year, neither of those guys are around.

And the only players on UM's defense with more starting experience than Chickillo are safety Vaughn Telemaque, who has 36 career starts, and cornerback Brandon McGee (13).

"Chick is starting to step up and become that leader a lot of guys are scared to be," said redshirt junior defensive tackle Curtis Porter. "He knows we need one."

Chickillo said he speaks to Spence frequently about the challenge he has of leading such a young front seven. Spence, he says, tells him not to worry and to lead by example.

"Sean just tells me to stay focused, don't bite off more than I can chew," Chickillo said. "He told me that as a sophomore he felt the same thing, to try and step up and be a leader. He told me his sophomore year wasn't anything great and that I need to stay focused and just work hard, have a better year than last year.

"He knows I get real hard on myself when I make mistakes. He's a guy who kept me focused when I needed it last year. Now, I have to do it myself and push other guys the way the Sean did. I have to become one of those leaders."

Last season, Chickillo finished with 38 tackles and five sacks, tied for the most on the team. He also finished third in the voting for ACC Defensive Rookie of the Year.

While he's concentrated a lot on improving his hands this off-season, Chickillo also said he's gotten "a lot stronger and more explosive at the point of attack."

Said right tackle Jermaine Johnson: "Chick is a bad ass. He's more mobile now, quicker, sneaky. You have to stay locked in or he'll blow by you.

MORE NEWS AND NOTES FROM TUESDAY

> Porter (6-1, 312) said defensive line coach Jethro Franklin has him learning the three technique at defensive tackle this spring, something Porter considers a challenge because he's only played nose guard (one technique) most of his career.

"Having short arms is the challenge," Porter said. "I'm very strong, compact. But guys that I go against are usually taller and have longer arms. I got to find ways to beat them because there are always hands in my face and I can't get to them. It's a mission right now. I just have to find ways to beat these guys with long arms. I'm beating them off the ball with my quickness and explosiveness, but I need to engage them and beat them there also."

Porter said he's trimmed down his body fat percentage from about 28 percent to 20 percent since arriving at UM.

> Both Porter and Chickillo say redshirt freshman Junior Alexis (6-2, 280) might be the strongest defensive lineman on the team. "I've never seen a freshman throw up 32 reps on 225," Porter said. "We just have to work on him keeping his leverage because he's a shorter guy. He has a low center of gravity. We're working on that now."

> Sophomore receiver Phillip Dorsett -- one of the few healthy receivers on scholarship actually participating this spring -- said redshirt sophomore quarterback Ryan Williams has looked good in practice and is more accurate than junior Stephen Morris. But Morris still has the stronger arm and can get the ball to receivers quicker.

"Both of them can do the job," Dorsett said. "As a receiver, we just have to adjust."

"Last year I couldn't bench 225 pounds over 20 times. No I'm doing it over 25 times. That helps inside with the big guys," Feliciano said. "Being lighter, I don't get tired as fast, I can run down field and make plays for receivers."

Henderson isn't being allowed to talk to reporters.

Lewis, a four-star defensive tackle out Palm Beach Lakes in 2008, is "going to be a good player there for us," Golden said. "He moves his feet well, is strong. He's 325, in that range and can move. I'm happy with him."

> Reserve tight end Billy Sanders, a redshirt junior, was out of practice with a cast on his lower right leg. Sanders is on crutches.