With freshmen Howard, Bush in the mix, cornerback figures to be most intriguing position battle at camp

Of all the position battles heading into the start of fall camp Aug. 3, few seem tougher to forecast than what might happen for the Hurricanes at cornerback. 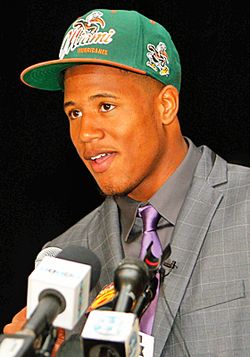 Outside of senior Brandon McGee, who made 12 starts last season, and Thomas Finnie, who played sparingly as a freshman, nobody else playing cornerback at UM has taken a snap at the FBS level.

Although that's somewhat of a scary prospect for defensive backs coach Paul Williams (at least he had seniors Mike Williams and JoJo Nicolas to throw out on the field last year along with McGee), he's also excited about the influx of incoming talent at the position -- headlined by blue chip freshmen Tracy Howard (5-11, 170) of Miramar High and Deon Bush (6-1, 179) of Miami Columbus.

In the end, Williams said, "we'll need at least six" cornerbacks to be ready to play.

While it appears almost certain McGee (38 tackles, 1 INT, 2 PBUs in 2011) will be one of Miami's starting corners, who starts opposite him and in nickel and dime situations could be anybody in a group of nine candidates. Although junior college transfer LaDarius Gunter (6-2, 196) left the spring as a starter ahead of true freshman Larry Hope (6-0, 175), none of the four corners who participated in spring football really blew Williams away.

"They got to get better -- even Brandon," Williams said. "They didn't finish exactly where we wanted them to. But was there improvement? Yeah. Do we have some talent there? Yeah. We just need to get them disciplined and to play our techniques the way we need them to play."

Part of that challenge, Williams said, is teaching them how to think and react like cornerbacks. Because so many talented athletes end up playing safety in high school (their coaches leave them as the last line of defense), Williams estimates "there is always less than 10 natural corners" available to recruit each year.

In UM's case, Williams said he feels like he got three natural corners in his last signing class: Tampa Plant's Antonio Crawford (5-11, 180), South Fort Myers' Nate Dortch (5-11, 152) and Howard. Williams considers Bush "a big physical kid that can play safety, but can be molded into a corner."

"I'm not going to say it's impossible for a freshman to start from day one," Williams said. "I coached Louis Delmas and E.J. Biggers [at Western Michigan] and they were four-year starters. They both took it over from the moment they walked in and didn't blink.

"But they key was those guys understood time management. They came in and we're in good shape. They handled it mentally. Not everybody can. Finnie wasn't ready to play last year. But we had no choice. If you can avoid [playing true freshmen], you avoid it. But in the end, somebody has to play for us this year. And we're going to need a few of those guys to step up."

Most are expecting Howard to be at the forefront on that list. But defensive coordinator Mark D'Onofrio warns that you never know when someone else can emerge.

"There are a lot of kids that can look at the game or look at a playbook and tell you something. But when they can truly envision it, having a casual conversation and talking about wrap concepts, coverages and they can see it in their head, that's when they can play fast. And [Howard] can talk about the game that way -- as good as any young, high school player I've been around," D'Onofrio said.

"That being said, right now he's in the same position the other six corners we signed are. You can't tell which guys are going to be the guys until you go out there and practice with them in August. I've been doing this long enough. Obviously we wanted [Howard]. He's a great player. The game is important to him. He understands the finer points of defensive back play. He's a fun kid to talk to. And I expect him to do well.

"But they all blossom at different times. There are some guys who are ready to go and others who it takes them their second year or third year. You can never tell until they get here. Jaiquawn Jarrett was a second round pick [Eagles in 2011], a safety we had at Temple. He was the last kid we signed in the class and he was starting by the fourth game of his freshman year. Who knew that would be that way with him? He just had it. You can't really tell until you go through eight to 10 practices and they're running around there that those are the guys who are going to make an impact."