« Canes' fab freshmen speak for first time since camp opened | Main | Brandon McGee is back in black; plus freshman receiver Malcolm Lewis is running with the 1st team »

Stephen Morris wasn't supposed to look this good coming off off-season back surgery. 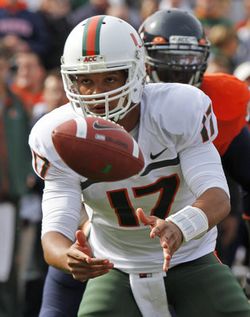 Ryan Williams was supposed to give him a good fight. That may still happen. But after 11 practices at the University of Miami, it's becoming more and more apparent Morris is on the verge of being named the Hurricane's starting quarterback.

And a solid performance in Sunday's first scrimmage of the fall (closed to the media and public) will probably lock it down.

UM coach Al Golden said he's going to give Morris and Williams equal reps with the first team. Offensive coordinator Jedd Fisch said both quarterbacks have been throwing accurately "at a very high level of completion percentage" and "neither one is making a whole lot of mistakes or turning the ball over."

But Morris, who has the stronger arm and more experience, might just be better than Williams at this point and unless he has a setback in Sunday's scrimmage (closed to the public and media), expect the Hurricanes to announce the junior as the starter as early as Monday.

"I get a sense everyday just watching them," Golden said when asked Saturday if there has been any separation in the battle. "But they'll both get a chance to throw to the [first team] receivers and then we'll get it on film and evaluate it.

"I think they've been really competitive. I am surprised at Stephen's conditioning and strength level. I really thought -- and we all did -- there would be a gradual integration for him. But he's been all-in to every practice. His conditioning, his core strength is really holding up well."

"I think the biggest thing that caught me off guard with Stephen is just how quickly he's been able to be 100 percent. There is no drop off at all," Fisch said. "As a matter of fact, I think he's better. I think his arm is stronger. His feet are fast. And mentally, it's not even close. The spring for him was like a redshirt year and an opportunity to be with me and talk football the entire practice."

Fisch said Morris benefitted from taking UM's freshman quarterbacks this spring and coaching them up on his own.

"He learned how to be more demonstrative as a leader, learned how to be someone who is not afraid to communicate with the other guys and let them know what he thinks," Fisch said. "Physically, the fact he didn't throw at all in the spring made his arm more lively."

Asked what he thinks Williams needs to do to win the job, Fisch said: "We don't look at it that way -- with what someone has to do. We'll come up with a decision on who is going to lead this team and then everybody is going to be on board with it, including the quarterback room.

"But right now, they just have to be prepared. As we all know one play and the next guy is up anyway. Whether you are the starter or not, you have to prepare like the No. 1 guy and really what's going on is that they're both doing a really good job leading the team... now it's just a matter of who is going to give us the best chance to win."