CORAL GABLES -- Offensive coordinator Jedd Fisch only called on one true freshman to start for him last season -- receiver Phillip Dorsett, who did it once in a 6-3 win at South Florida. 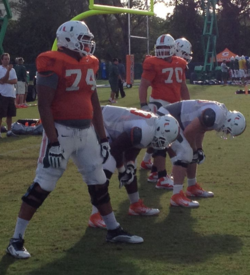 True freshman Ereck Flowers (74) continues to work with the first team with Seantrel Henderson out.

Fisch's second season at the helm of the Hurricanes' offense could feature quite a few more starts from baby-faced Canes -- and former Under-Armor All-American Ereck Flowers (6-6, 314) of Miami Norland could be the first in line.

With Seantrel Henderson now listed as day-to-day according to coach Al Golden and it unclear when the 6-8, 340-pound junior will be back following his car accident and concussion, Flowers continues to run with the first team. And he continues to impress.

"He's doing great. I'm really impressed with him. He's running with the ones everyday," Fisch said. "There is no hesitancy. You wouldn't think he's a freshman the way he's playing. He understands the system. He's next to Brandon Linder everyday and he can communicate. I'm really proud of the way Ereck is playing and all the potential he's showing us. He's strong. He's physical. He's athletic and he really seems to enjoy the game.

"I don't have any apprehension at all starting any true freshman that deserves to be the starter."

Flowers, a former basketball standout who didn't begin focusing on football until his junior year at Miami Dr. Krop, was known best at Norland for his run blocking and opening up holes for fellow Canes freshman and Mr. Florida football Duke Johnson. But so far at UM, Flowers' pass blocking has also passed the eye-test according to Fisch.

"I think his pass [protection] has been excellent," Fisch said. "He has great feet and he's been doing a great job with us there."

> As expected, linebacker Jimmy Gaines returned to practice Friday morning after missing the first week with an ankle injury he carried over from the spring. Gaines, the only linebacker with starting experience at all three linebacker spots, dodged a question about whether or not he's 100 percent.

Golden said he would bring Gaines back along slowly and reiterated that he probably won't play in Sunday's scrimmage. Gaines said he spent the off-season studying with former teammate Sean Spence and continues to talk to him on a regular basis.

> Golden said he expects sophomore linebacker Gionni Paul to return on Tuesday. "Gionni was doing good [before he was hurt]," Golden said. "We need Gionni to step up, not just at linebacker but as a special teams player. He's a physical run and hit guy for us. We need him back."

> Golden said sophomore linebacker Thurston Armbrister was "banged up" Thursday, but didn't elaborate how long he would be out or limited.

> Sophomore receiver Rashawn Scott, who broke out this past spring, said he spent the off-season studying Giants receivers Victor Cruz and Hakeem Nicks and former Hurricane Andre Johnson and the way they create separation. Scott is working mostly at split end. He said his improved grasp of the Hurricanes playbook has really helped him play a lot faster. Scott played in a wildcat offense in high school.

"I couldn't play fast last year," Scott said. "Now, I know exactly where I'm supposed to be and where everybody else is supposed to be."

> Running back Mike James said he hasn't had to humble freshman Duke Johnson at all.

"Duke is humble. In fact, I have to tell him, let it hang out, don't hold back," James said. "There's a difference between confidence and cockiness. I told him if you make a play, celebrate it. Let everybody know. It's alright."

> Redshirt freshman Ricardo Williams, listed as the backup to Anthony Chickillo at defensive end, has gained 35 pounds in the past year, going from 220 to 255. Williams said it has helped him improve tremendously on run defense.

> Kicker Jake Wieclaw said his focus in camp has been trying to get his kicks up higher and quicker this season. Wieclaw said he had two field goal attempts blocked last season.

He's also adjusting to the new NCAA kickoff rules. Starting this season, teams will kick off at the 35-yard line instead of the 30 and the kicking team can’t line up for kickoffs behind the 30-yard line -- a move intended to limit the running start kicking teams have during the play and potential injuries.

Another significant rule change affects touchbacks, which will now be moved to the 25-yard line instead of the 20. Touchbacks on other plays, such as punts in the end zone or fumbles that go out of the end zone, will remain at the 20-yard line.

"It's kind of a trade-off," Wieclaw said. "The 35 is a little bit shorter field so it's easier to get it out there. So hang time is something we're focusing on. We don't always wanted to just kick out of the end zone and let them have it at the 25."