Vernon Davis grew up dreaming of playing for the Miami Hurricanes. But that dream apparently died after a few weeks of training camp. 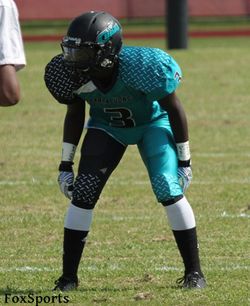 The freshman cornerback from Miami Coral Reef received his release from scholarship Tuesday and according to his former high school coach will be headed to West Virginia on Wednesday morning.

"He just felt like he couldn't trust their coaches anymore," Coral Reef coach Chevas Clements said. "He wasn't happy. He saw how he had slid down the depth chart and how UM was going out and getting all these commitments from guys like [Miami Northwestern's] Artie Burns and [Southridge's] Jamal Carter. When was he going to play?"

Davis, a three-star recruit and former All-Dade First Team selection by The Miami Herald, asked for his release on Friday. Clements said UM coaches tried to convince him to stay. But in the end, Davis' heart was set on leaving.

"At West Virginia they got two walk-ons who are backups," Clements said. "He knows he's got a much better chance to get on the field there."

Clements said Davis was on his way to Coral Reef to fax his information to West Virginia. Per NCAA rules, Davis will sit out the 2012 season.

"He was going to redshirt anyway," Clements said. "Honestly, I would have preferred if he stayed at Miami. I like the coaches there. But he was dead-set against it."

Four of the remaining seven new arrivals in the secondary are expected to make it onto the travel roster: LaDarius Gunter, Tracy Howard, Antonio Crawford and Deon Bush.