Flowers' emergence leaves Canes with a big question: What do you do with Seantrel?

University of Miami offensive coordinator Jedd Fisch pretty much had a delightful time breaking down game film of Saturday's win at Boston College. 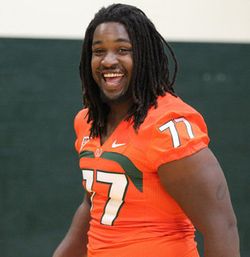 Sure, his unit got off to a little bit of a slow start (early drops) and didn't score on their final two drives. But there was a whole lot of goodness in between. The Canes offense scored 34 points (seven came on Denzel Perryman's INT return), produced 415 yards of total offense and saw a lot of promising signs from a boatload of freshmen.

One would assume Fisch doesn't have much to concern himself with. But he does (at least a little). What should he do with Seantrel Henderson?

The high school All-American and USA Today Offensive Player of the Year in 2009 returned to work with the regular unit on Tuesday (he spent last week on the scout team after missing all of camp) and no longer has the starting spot at right tackle. Freshman Ereck Flowers, who graded out at 94 percent at right tackle Saturday, appears as though he's locked into that role now.

Could Henderson slide over to the left side? Could the Canes line him up at guard? It certainly doesn't seem like a bad problem to have. But it's one Hurricanes coaches don't really seem to have an answer for yet -- other than Henderson and more backups need to play. Saturday at BC, the only backup who got into the game was guard Jeremy Lewis, and he was in for a total of two snaps.

While Golden said the Canes will always go with their best five starters and said that "now it's up to Seantrel to chip away," Fisch didn't seem eager to get Henderson on the field or switch him to another spot on the line. Asked about how much playing time Henderson could get at Kansas State, Fisch was non-committal and said, "I need to see the film." As for where he will play, Fisch said: "He's a tackle."

"We could probably give him some work on the other side. But I don't think we're going to do that right now," Fisch said. "We're going to continue to let him play in the position he's most comfortable with."

At this point, the only thing you can feel pretty positive about is that Henderson will travel with the Canes to Kansas State. Playing time? That's another issue. If Flowers continues to perform like he has, it may be awhile before Henderson gets in.

> Fisch said what he liked most about Stephen Morris' start Saturday (28 of 45, 207 yards, 1 TD, 1 INT) was that he never strayed from the game plan and took chances downfield. "That was really the most important thing we preached last week that we were going to be real patient. We didn't want to kind of put ourselves in difficult situations, force any throws downfield," Fisch said.

"We felt like that was not a team you kind of good deep on. I think we threw three balls over 10 yards in the air and he executed that well. The three balls he did throw downfield they were all catchable balls. I was proud of him. That makes a huge difference when your quarterback does that."

As for his freshmen, Fisch pretty much my sentiments from today's early morning blog that Saturday's opener "was just another game for them."

> As I told you Sunday, Fisch said not to expect to see the hurry-up offense every week. Every game plan is different.

"We went into that game against Boston College saying the best way to attack them was pushing the tempo and felt as if that was going to be something against that team and that defense. Coming off playing them the last game the year before you kind of have to show them some other wrinkles," Fisch said. "We'll continue each week to determine the best way to move the football and how we're going to do it. Whether it be running the ball. Whether it be stretching the field or hurrying up. That's what we'll go out and execute on game day."

After failing to punch it into the end zone late in the game last season in a 28-24 loss to Kansas State, Fisch said the focus this week in practice will be on "finishing strong." Golden said that loss stuck with the Canes all season.

> What has elevated redshirt freshman Eddie Johnson to a starting role at strong side linebacker in the team's latest depth chart?

"I see more consistency," Golden said ."It showed up on game day. If you can contrast the play where he caused the fumble - that was who we were the other day. We made a mistake, but finished the play. We weren't paralyzed by our mistakes, kept fighting, and Eddie's play personifies that. He gets beat, chases and knocks the ball out. It's hard to teach that aggressiveness and recklessness, and it's good to see he had that first time out."

#### I'll have a story on UM's defense and what went wrong Saturday in tomorrow's paper along with quotes and insight from defensive coordinator Mark D'Onofrio.