« Perryman has high ankle sprain; UM should know more Sunday morning | Main | Noon Kickoff reflects a sad state of affairs for UM attendance, but coaches like that it gives them extra time to prepare for Georgia Tech »

> Quarterback: Stephen Morris had an unusually inaccurate day, overthrowing open receivers and looking generally uncomfortable and indecisive with where to go with the ball. So far, through 3 games, Morris has completed 63.2 percent of his passes for just over 600 yards, 2 TDs and 2 INTs. Those are hardly impressive numbers. Now, we all can see Morris has a strong arm. But does offensive coordinator Jedd Fisch know something about Morris we don't? He hasn't asked Morris to go deep often. And when he did Saturday, Morris was way off with his touch. I'm not putting this all on Stephen. His receivers haven't always created a lot of separation or held onto the balls he's put right in their hands. But I think it's fair to question if Morris might have limitations. UM's offense simply hasn't been able to spread the field through three games. And I thought coming into the season, the strong-armed Morris would do that for sure. The passing game has to improve.

> Running back: I said before the season it would only be a matter of time before Duke Johnson became the featured ball carrier in UM's offense. I honestly didn't think it would be this quickly. Saturday, though, we saw Johnson take on a much bigger role -- even though his touches (18) were not that much more than in previous games. Still, whenever UM needed a big play Fisch went to Duke. His 253 rushing yards on 27 attempts give him a 9.4 average. Yes, 9.4. He's also third on the team in receiving with eight catches. As special as Duke is, coach Al Golden realizes he can't over work him. It will be interesting to see just how Fisch balances it. With two long kickoff returns already, UM really can't afford to take Johnson off special teams. Fewer carries and more catches might work better because that allows Johnson to work in open space rather than take jarring hits at the line. But in order to cut back on Duke's carries, UM needs Mike James to be as productive as he was Saturday. He's averaging 5.2 yards a carry. Eduardo Clements, who we did not see until the second half Saturday, is averaging just 3.5 yards a carry.

> Receivers/tight ends: Phillip Dorsett and Rashawn Scott (who made a brilliant, leaping 1-handed catch Saturday) have shown flashes, but it's clear Allen Hurns (who did not play vs. Bethune) is UM's best receiver because of his physicality and toughness. He also appears to have the best chemistry with Morris. The fact Dorsett (UM's fastest receiver) is averaging just 7.4 yards a catch is troubling. Something has to be done to fix that. After 3 games, it's also pretty clear Malcolm Lewis is the only freshman receiver Fisch has any faith in. I thought for sure we might have seen Robert Lockhart by now. We haven't. As for tight ends Clive Walford and Asante Cleveland, they've combined for 9 catches, 91 yards and a touchdown so far. That means they're on pace to finish with 36 catches for 364 yards and four touchdowns this season -- that's quite a bit less than the 50 catches Fisch projected. Rather ordinary, too.

> Offensive line: Raise your hand if you wanted Seantrel Henderson off the team just a few weeks ago. Liars! Henderson felt the wrath of a quite a few fans for missing training camp. But he's made a nice recovery in three weeks time. I'm not a betting man (prefer fantasy football), but my guess is it won't be long before Seantrel is back in the starting lineup. The question is which side. I haven't broken down film like Art Kehoe, but seems to me Malcolm Bunche has been beaten more often on the left side than Ereck Flowers on the right. Either way, all will and should continue to share time. So far, UM's line looks like a six-man rotation. Jeremy Lewis (flagged for holding Saturday) has not emerged. On a side note, UM was flagged four times for false starts Saturday. They need to fix it. UM didn't give up any sacks Saturday, but have given up six total. That means they're on pace for 24. UM gave up 19 total last year.

> Defensive line: Shayon Green continues to lead the team in tackles. He's got 23 now. Imagine how many more he would have if he actually was able to wrap up on sacks? Miami by the way has four of those now, three came against Bethune-Cookman. The Hurricanes certainly created more pressure Saturday than they had all season. But you have to put an asterisk next to that because of the level of competition. The good news is we saw more blitzes -- including a few from safety Deon Bush. Defensive coordinator Mark D'Onofrio wasn't calling for that in Week 1 and Week 2. As for the run defense, Bethune averaged 4.4 yards a carry Saturday. Opponents are now averaging 205 yards a game on the ground against UM. Yes, that's appalling.

> Linebackers: Miami fans will be holding their breath to see just how banged up Denzel Perryman's right ankle is after he is reevaluated Sunday morning. With Georgia Tech on deck, UM could I'll-afford to be without Perryman. Jimmy Gaines said he's ready to fill in if need be, but it's a daunting task either way next Saturday. If there is a positive for Miami after Saturday is that UM looked better playing assignment football against the option than they did last week. Except for a handful of explosive runs, it seems like there were fewer blown assignments and missed gaps. Georgia Tech will be the third straight option team UM faces. Unfortunately, they're the best in the country at it. Eddie Johnson continues to be the team's most pleasant surprise at linebacker.

> Secondary: The Canes still got beat a couple times downfield Saturday, but it felt like players did a better job batting balls and being around in coverage. Granted, it's Bethune. But it was still progress. Deon Bush only had 3 tackles Saturday, but it felt like he was around the ball a lot. It's pretty clear he's UM's fastest and most athletic safety. A.J. Highsmith had just one tackle in his first start. Cornerback Brandon McGee had his first two pass deflections of the season versus Bethune, a week after collecting an INT. That's continued improvement.

> Special teams: Outside of Phillip Dorsett's fumble on a punt return Saturday and some shoddy kick coverage at K-State, UM's special teams has been pretty good. Jake Wieclaw hasn't missed a kick and Dalton Botts is averaging 41 yards a punt including five inside the 20. 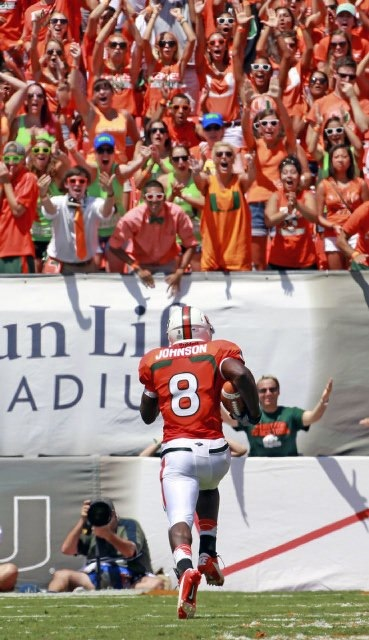