After getting steamrolled on defense for two straight weeks to open the season, Hurricanes coaches and players insisted there was no way they could afford to look past Bethune-Cookman and start game-planning for Georgia Tech's spread-option offense last week. 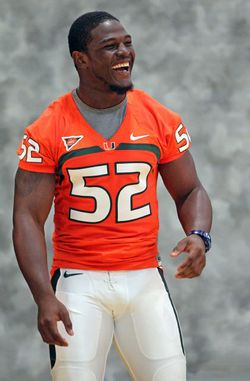 Now, it appears UM (2-1) could have to get ready for the Yellow Jackets -- who ran for 461 yards in a 56-20 win over Virginia Saturday -- without starting middle linebacker Denzel Perryman.

The sophomore from Coral Gables sustained a high right ankle sprain in the second quarter Saturday, according to a source. Although the degree of the sprain remains unknown, Perryman told family and friends he could put weight on the injured ankle after the game.

Perryman was wearing a black boot to protect the ankle while standing on crutches on the UM sideline in the second half. He had x-rays performed at halftime. Results were negative, the source said. But he will be reevaluated Sunday morning.

Losing Perryman would obviously be a huge blow for UM, which already came in ranked 89th in run defense and gave up 233 yards on 53 attempts (4.4 per carry) to the FCS-level Wildcats in a 38-10 win Saturday.

Junior Jimmy Gaines, who is returning from an ankle injury himself, replaced Perryman at middle linebacker for most of the second half. Perryman had four tackles Saturday including one for loss.

UM had a handful of other players go down with injuries. Backup safety Andrew Swasey, who was also seen on crutches, and long-snapper Sean McNally were injured in the first quarter and never returned. Backup linebacker Thurston Ambrister injured his right shoulder late in the game.

Despite the injuries and the yardage the Wildcats put up, UM coach Al Golden thought progress was made on defense.

"Is it perfect yet? No. It's not perfect. But kids were fighting, flying around," Golden said. "We didn't get the takeaways we wanted to get. Again, that's hard to do. We had a veteran team a year ago and didn't keep [Bethune-Cookman] out of the end zone like we did [Saturday]. We improved. Clearly, we have to go back to work [Sunday]."

UM produced three sacks -- two by freshman defensive end Tyriq McCord. But Golden was disappointed with how many other sacks the Canes let slip through their fingers Saturday.

"I just didn't wrap up," said defensive end Shayon Green, who had eight tackles to lead UM again. "They just slipped through my hands, I don't even know. It happens. I'll look at the film. That's easy to fix."