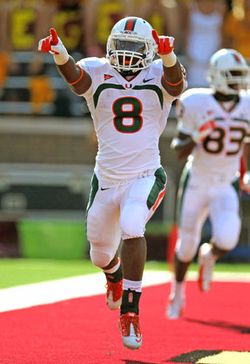 So could Johnson end up breaking the single-season kickoff average in Canes' history? He might.

In terms of career kickoff return yardage, Randal Hill owns the mark with 1,169 yards. Johnson, by the way, already ranks ninth all-time in terms of yardage and is tied for the career mark in touchdown returns (2) with Ottis Anderson, Hester and Tim Morgan.

"Obviously Duke, he hit it hard, found a crease," Barrow said of Johnson's 95-yard kick return for a touchdown. "But those guys laid on a barbwire for him, tried to block guys to the Gatorade cooler and gave him an opportunity to find a button to run off."

UM ranks 13th nationally in kickoff coverage defense, but it's an area UM coach Al Golden and Barrow agreed this week the team has to improve on. Of UM's 56 kickoffs this season, only six have gone for touchbacks. Of the 120 teams at the FBS level, only 14 teams have single-digit touchbacks.

"A few times we've missed a layup, had a guy inside the 20 and missed a tackle," Barrow said. "We also have to get better ball placement where scheme is setup. We went from being one of the tops in the ACC to now we kind of slipped on a banana the last few games. We have to get back to our training and what we do well, and challenge our guys to get off the milk cartons and make plays."

Said Golden: "A lot of it's personnel. We've had a lot of changes, lose Deon [Bush] and Gabe [Terry], elite cover guys in terms of speed and strength. It hurts. We've made a lot of changes there, need some guys to step up and respond - [Raphael] Kirby, guys like that. We need other guys to step up. Eduardo [Clements] is hurt, too. Eduardo was great at it. Dallas [Crawford] has stepped up. We need others to."

> Although he's moved back behind Denzel Perryman this week at weakside linebacker, odds are sophomore Gionni Paul will be fighting with freshman Raphael Kirby to be UM's starting middle linebacker -- and not in pass coverage -- next season. Paul was beaten for the game-winning TD pass at Virginia.

"Gionni has a great knack for finding the football," defensive coordinator Mark D'Onofrio said. "He made 14 tackles [at Virginia]. He has to improve his conditioning, improve his speed and his pass defense and his knowledge of the defense. Until he does all that there's going to be some plays where not only, he but some other guys get exposed [in pass defense]. But I'd rather have a guy who can find the ball, than one who can't, and that's his strongest asset."

Barrow agrees. "He's a guy that has instincts, comes from Ray Lewis' high school. Must be something in the water up there," Barrow said. "He knows what he needs to focus on. Last year he didn't play a lot like he wanted to and we wanted him to. Through the ups and downs, he's kept fighting. I like guys like that."

> With the program mired in mediocrity and with NCAA sanctions hanging over head, one might imagine the recruiting pitch has changed. Barrow said he tells recruits when he goes out on the trail that at UM there are great opportunities to play.

"It's still an opportunity to win a championship, a great opportunity at education, for playing time," Barrow said. "We're still playing a lot of young guys. We're a top 30 university in the nation, a private school. Socially it's like a buffet here. It's a small town of Coral Gables outside a major city. There's a reason LeBron [James] went to Miami. It's a beautiful place. And with us located in Coral Gables, that's the Beverly Hills of our county."

> Receiver Phillip Dorsett bounced back from his struggles with a nice performance at Virginia. The Canes, however, will be short a couple more receivers this week with Allen Hurns banged up, Davon Johnson likely out and Rashawn Scott still suspended. The good news? South Florida ranks 102nd out of 120 FBS teams in pass efficiency defense.

"They like to play a lot of Cover 4, Cover 8, man up," Dorsett said. "They're a physical defense. Secondary can run a little bit. I know [former Monsignor Pace standout] Kayvon Webster. I went to middle school with him. It's going to be a challenge like every week."