Cristobal ready to hit the ground running with the Canes

Mario Cristobal was about as shocked as the rest of the college football world was last month when he was fired as the head coach at FIU. 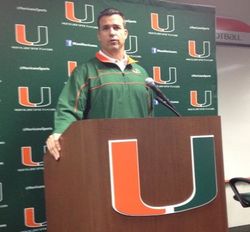 The sting still doesn't look like it has worn off -- even five weeks later. But the 42-year old former Hurricane, who turned FIU from arguably the worst program in the country and built it into a conference champion, made it clear Friday he's ready to move on and happy to be in familiar colors again.

Cristobal, hired on Thursday to become UM's new tight ends coach and the program's new associate head coach, met with the media Friday and expressed his gratitude to coach Al Golden, who was one of the first people to call him on Dec. 5, the day FIU athletic director Pete Garcia dumped him.

"Moments like that aren't the most fun for a family [getting fired]. But the support always was strong [from UM]. What coach Golden has always done around his family is what he's doing right now. He's doing things the right way -- a true care factor which always goes far when you're a teacher. As coaches, that's what you are, a teacher. You're teaching these young men how to be better at everything, not just football. Just knowing what he is about, what he wants for this program, those things aligns pretty well. So when the opportunity was presented, I was thrilled."

Cristobal, who coached with UM defensive coordinator Mark D'Onofrio at Rutgers in 2001 and 2002, said he didn't get to know Golden until around 2004, 2005. He said their relationship strengthened over time, especially when Cristobal and FIU's coaches were invited to come and watch UM practices over the last couple years.

"He's an intense, relentless worker with a vision," Cristobal said of Golden. "That's the most important thing. A goal without a plan is a wish. You're looking at a man that set a goal, a regimented plan, a very specific, goal-oriented plan. I don't think coach Golden and the staff has got enough credit for putting UM back on track like it is right now. I know the excitement is strong. People can see that this young crop of players is talented and more are on their way and being developed and that's just as important as anything else. It's okay to come in with talent but you have to leave better than you come in. The plan from top to bottom is impressive. It's one that I'm blown away by it. I've learned a lot in a day and a half."

Here is a transcript of what else Cristobal was talking about Friday:

Q: What's it like to be back?
"The last day-and-a-half has been pretty hectic with all the stuff going on. It's an incredible feeling. I think everyone knows how I feel about the University of Miami. I'm excited about getting back here and working and getting to work right away. When I was a player here it's embedded in your mind about being relentless about everything you do. Now joining on a staff in the same way, shape and form is incredible. It's hit the ground running, assisting the staff anyway I can.

Q: Is it awkward going from a head coach to being an assistant?
"Well I was the same person as a GA, less gray hair. I was the same person as an assistant as a head coach. I don't think that changes. You are what you are when you wake up in the morning, when you go to bed at night. I don't think that changes. If it does you were probably raised the wrong way. I'm ready to accept and excel at each and every role I'm assigned to so we can do whatever possible to make sure we flat out win at everything we do -- football, classroom."

Q: When you left here did you envision a scenario where you'd be back here?
"The way it turned out I don't think anyone can ever envision stuff like that. You have to understand how special this place is. I think people in this room do. The focus is on the now. Everything is about the vision coach has set for this program. The way the culture is continually cultivated more and more toward just becoming a champion, a very aggressive mentality in a positive way of making sure good isn't good enough and when great gets here it's not good enough either. It's demanding in the right ways. When you're part of a staff like that it's a tremendous situation."

Q: Do you remember your last practice as a UM assistant in 2006? Randy Shannon said you were deliberating if you should go to FIU or not.
"When you play here, I think I'm speaking the truth, you're kind of trained to be very, very different. You're trained to be something special. There's something special within these walls that's not seen outside of here, not relent for anything. It's persistence to the core. That's a tough decision. In this profession that's the one thing I've learned - it's an unforgiving profession. At certain times some decisions the outside world will never know how painful they are, but when they take place it's done for what someone thinks is the right reason. I've grown tremendously from it, learned a bunch by it. You can't ever learn enough in this profession or life. Those are things that can apply daily in my new position."

Q: With recruiting, how involved are you in that already? Is Brennan Carroll still the recruiting coordinator?
"All of that stuff is going to be settled. The entire staff works on recruiting. There's always a recruiting coordinator title. Not everyone can sit in recruiting meetings, but you'd be amazed the detail and work that goes into it. The short time I've been here, it's been awesome. You look at a group of guys that are detailed in every single facet of what it is to be a recruiter on top of your assistant coach duties. Everyone's involved 24/7. And that's the way it should be. You see the overhaul of the roster. To me with three weeks to go in recruiting it's about attack mode. Wherever I need to go, where I need be sent, need to accomplish in 2014 and 2015, let's go. There is no time to rest. The contact period is on and we're rolling."

Q: How different is the program now vs. when you left it?
"Completely different. The facilities different as well and they're changing. Until you sit there with coach Golden, go step by step with the plan in detail, the expectations he has for himself, assistant coaches; players as well; it's a legitimate program built to win championships, it's not just football. When development on the human side goes hand-in-hand with the human side that's when you build a locker room full of winners. That's certainly what the goal. It's getting done."

Q: What's it like to have to not move anywhere?
"When you're in this profession you may as well live on the moon. The only time you see your kids is when they wake up at 3 a.m. and play wrestlemania on you. It's home, you know. It's a tremendous honor."

Q: How surprised were you that you were fired by FIU?
"It's surprising. Like I said `It is what it is and the focus is on the now.' To me, for those assistant coaches and taking what was considered the worst program in America to a conference title and a bowl game, every year sending guys to the NFL, all the kudos to the assistant coaches and the players. That's really about it in terms of what I have to say about it."

Q: Did coaching and knowing defensive coordinator Mark D'Onofrio from Rutgers help in the transition?
"He's on the road today, but we worked together over there in a different scenario. That was one of the tougher situations in America. We were under the same professor in coach [Greg] Schiano at the time. All those bits and pieces show up again. He's a great man, great coach, great father. As you walk down the hallway you'll find the same similarities in all the men that are on this staff."

Q: Rob Chudzinski was named the Browns coach. You worked with him. How happy are you for him?
"Very proud of him. He's obviously a great football coach. He got himself a great shot. I know everybody is excited for him. He's been working for a long time. You always have to applaud a guy who probably didn't come in as a the highest ranked player in the class, but somehow, someway he's starting the Orange Bowl against Oklahoma. You know his pathway through here. Not only is it well deserved, he'll do extremely well."

Q: How much have you seen your current tight ends on tape?
"Not enough yet. I watched a bunch of games last night. Everyone reports on Sunday, so that's critical to establish relationships, establish standards as well. They understand what's expected. It's another semester now under the program, the off-season program, which is very demanding."

Q: Are there certain areas of the state you'll recruit?"I don't know yet. I'm still trying to focus on how to long on; get my phone number still."

Q: Is there some overlap in recruiting at FIU to now at UM - it's a different recruiting pool, but you have relationships with coaches and things like that.
"Always. You're looking at - it starts as the same pool, ends up being a different pool. But that's okay, there are relationships formed. We'll work at it hard. We take a tremendous amount of pride in it. One of the gifts I thought I received here was learning how to work, learning how to really work and get after it. When you do that you can't help come across people you form relationships with. Sometimes it's a great get or an assist in getting a guy. All those things are being looked at to the max to help out in any way I can."

Q: You have two sons -- 3 and 1 1/2 years old. How are they?
"I feel like being a father has helped me as a coach. My mantra is treat every player like they are your own son. But until that little coconut head popped out, it just wasn't the same. As a coach, you are a teacher."