At one point before Alzheimer's disease began taking its toll, Ron Fraser saw a poem he liked, copied it down and put it in his briefcase -- a message he hoped would be delivered at the right time. 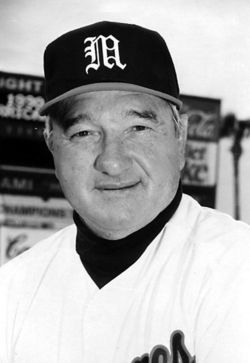 Monday morning, as the late father of University of Miami baseball was being remembered and honored with eulogies and choir songs, his three daughters shared the poem with a congregation of hundreds who gathered for Fraser's funeral mass at St. Mark the Evangelist Catholic Church in Southwest Ranches.

The title of the poem Fraser had intended for his daughters to see once he was gone: "I'm Free."

"[Fraser's wife of 24 years] Karen found it. It talked about being free and don't grieve for me and that while they're are things I've left undone, God wants me and I'm with him now," Fraser's youngest daughter, Elizabeth Fraser Kraut, said fighting back emotion.

"It was left for us from Popie to help us deal with the grief of losing him. We hoped it would help the congregation get through their grief -- because we are all family. I can't even express to you in words how wonderful the outpouring of support has been."

Fraser, who passed away a week ago Sunday at age 79, will continue to be honored in the coming weeks.

The University of Miami has planned "A Celebration of the Life of Ron Fraser" for Saturday, Feb. 23 on campus with another event scheduled later that night during the baseball game against Milwaukee. The Ron Fraser Wizard Fund plans on honoring the Hall of Fame coach with a bronze statue at Alex Rodriguez Park at Mark Light Field. Current UM baseball coach Jim Morris said the program is committed to dedicating the season to Fraser in other ways not yet announced. Kraut said a private burial service will then take place in her father's hometown of Nutley, N.J. in March or April.

Monday's two-hour long mass -- as well as Sunday's eight-hour visitation at Stanfill Funeral Homes in Miami -- provided an opportunity for those closest to him to share stories and remember not just the man who was dubbed "The Wizard of College Baseball" but who served as a father figure for many young men, said Kraut and close friends.

"The family asked me to speak about him as a coach and what he meant to players like myself," Fiore said of the morning service. "I told one story today about how one time when we were playing Florida State my freshman year, down one run, late in the game, I'm standing on third thinking 'Do I let the ball go through? Do I run home if it gets past the catcher?'

"He walks up to me and looks at the crowd of six, seven thousand and says 'How many hamburgers and hot dogs do you think we sold tonight?' It was his unique way of alleviating stress from me, his way of saying I trust you, trust the way you play, go ahead and react. That was the greatest thing about coach Fraser. He always made you feel comfortable."

Fraser, who amassed a 1,271-438-9 record at UM and coached the Olympic team after retiring following the 1992 season, began coaching at UM for a $2,200 salary. He took a cow pasture for a field and raised the money for a ballpark with fundraising and marketing genius -- and not much financial help from UM.

Remmert, now UM's Director of Alumni programs, recalled how when Fraser first became coach of the Hurricanes he took a second job as athletic director of the Coral Gables youth center and borrowed equipment from there because UM didn't have any. The team's first uniforms, Remmert said, Fraser got those through his U.S. Military Academy connection.

"They took the A, R and Y off [the uniforms] and left the M on," Remmert said. "That's where the famous M came from.

"One of the first promotions he had after getting lights and fences for the baseball field and charging $1 for tickets was the 'Baseball from Outer Space.' The plan was to have a parachute jumper come in with a neon colored ball. The jumper got caught up in the wind and ended up landing in the old serpentarium instead. Coach also brought the first mascot to college baseball with the Miami Maniac.

"He saw the modern game of college baseball and what it could look like. [Former LSU coach] Skip Bertman said Ron was 30 years ahead of his time and proved to athletic directors baseball could be a revenue sport."

Kraut said she heard stories about her father on Sunday and Monday she hadn't heard before and that it has comforted the family.

"The phone calls, the tweets, text messages, the Facebook postings," Kraut said. "it's amazing how much people loved Popie and how much they've taken us under their wings."