The University of Miami's compliance office took to Twitter Thursday morning to send a message it hoped its fans would receive and heed: leave recruits alone. 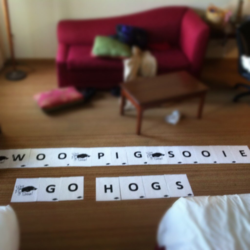 "Canes fans: We love when you support #TheU, but remember, only coaches can recruit prospects. #AskBeforeUAct," the tweet at around 10 a.m. from @UCompliance read.

Why the concern? Fans from both Miami and Arkansas have been a little too interested lately in trying to sway South Plantation blue-chip running back Alex Collins to pick their school. Collins is set to announce his college decision in an Atlanta TV studio Monday night after 10 p.m. on FoxSports Network.

It's against NCAA rules for fans -- especially those who provide financial aid to the schools they love -- to get involved in the recruiting process. Lucky for them, the NCAA doesn't have the time or resources to chase everyone down. But in this case, with Miami being under investigation, it's probably a good idea for Hurricanes fans to stop.

Collins, whose Twitter account is @Budda03, has been relatively happy with "the love" he's been receiving. But messages have been getting nasty lately. Some UM fans believe Collins' high school coach Doug Gatewood is steering him away from Miami because of an alleged connection to Arkansas.

Here is one example of one of those Tweets from Cane Flexin @ThatCaneZo: "Hey @Budda03 don't let your coach make your decision for you. It's your decision and yours only."

This morning Collins responded to some of those tweets: "It's crazy how people can make things up or assume things that's no where close to being true.. I've been hearin crazy things thats not true."

Gatewood has vehemently denied the claims and told The Miami Herald Thursday: "I get paid $3,100 to be a head coach and have caught more [expletive] this year than you can imagine. People sitting there saying I'm profiting from this, I'm going to send them a picture of my truck. It needs a paint job and is missing a window.

"I guess it happens. But I've never been a part of it. Everybody talks about my relationship with [Arkansas assistant] Charlie [Patridge]. At the end of the day, I use every resource I have to help my kids get recruited. I call every person I know when I have a kid. When [Collins] started playing last year nobody was recruiting him. I called everybody and said 'I got a kid. You got to come look at him.'"

"As much as I care about him, he cares about me as well. Nobody wants people talking [expletive] about their coach."

Some UM fans have responded positively to the UM compliance office's request. Victor Castro ‏(@BudussyCanes) tweeted Collins: "Mr. Collins, wherever U decide 2 play ur college ball, we Canes wish U nothing but the best of luck. #GOCanes"

Arkansas fans, meanwhile, have continued to pursue Collins. The running back shared a picture of a chain of papers he got in the mail which reads: WOO PIG SOOIE GO HOGS!

Here's a list of some of the tweets Collins has received from both Miami and Arkanas fans and retweeted:

From Randall Baker ‏@RSB416
"@Budda03 if you came to arkansas, I'd convert to Buddism."

From Gene Esposito ‏@GeneEspo69
"@Budda03 u gonna play for Miami and hit up south beach or play for Arkansas where marrying your cousin is common?"

From Jonathon Zenk ‏@jzenk42
"@Budda03 You should go to Miami, unless you would enjoy getting your teeth kicked in by Bama and LSU every year..."

Perhaps the most interesting tweet came from Arkansas coach Bret Bielema himself. Of course, it wasn't directly sent to Collins. But it did mention Budda -- Collin's nickname. Bielema sent it to his running backs coach.

The picture Beilema tweeted is below. Wonder if the NCAA will question Bielema for the Budda reference? 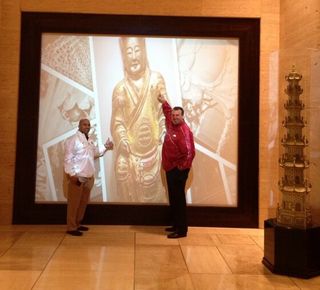