« UM Hurricanes baseball coach Jim Morris will NOT be released from Duke University Hospital in Durham, N.C., this weekend, and will miss the Louisville regional | Main | UM set to meet with NCAA infractions committee Thursday morning » 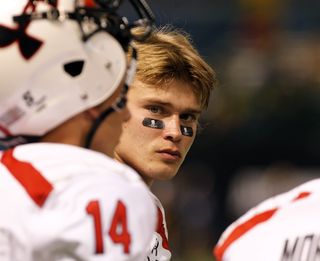 The University of Miami’s quarterback of the future, Wayne Hills, N.J., High School senior and soon-to-be graduate Kevin Olsen, was charged with “leaving the scene of an accident after he smashed his car into a vehicle in his hometown of Wayne” on May 25, according to court records reported Monday by The Wayne Patch local newspaper.

Olsen “was additionally charged with failure to report an accident and careless driving” after the incident was witnessed by a bystander who said the quarterback “crashed his car into a tree and drove away,” according to the Wayne Patch.

After checking out the damage, the report said, Olsen hit another car “parked on the road” in the neighborhood while leaving the scene.

According to the paper, the police report said Olsen’s face appeared to have blood on it and that he “appeared to be under the influence of something.”

He is reportedly scheduled to appear in Wayne Municipal Court on June 20.

Olsen’s older brother Greg was a tight end for the Hurricanes and now plays for the Carolina Panthers in the NFL. Kevin Olsen is scheduled to report to UM to begin his collegiate career this summer.

The university said Tuesday it was unaware of Olsen's legal situation. "We are still trying to gather information about what happened," said Chris Yandle, UM's director of communications for athletics.