They're all here in Indy for NCAA hearings -- UM, Haith, Hurtt and the rest of the crew

INDIANAPOLIS -- As the unofficial attendance taker here I can tell you everyone is present for breakfast on the day of the NCAA hearings with the infractions committee regarding allegations made by former booster Nevin Shapiro and the University of Miami. 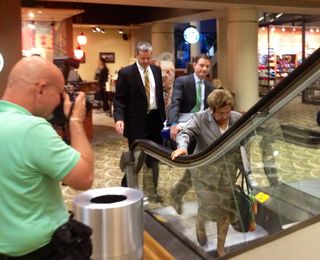 Well, everyone but Nevin. He's still in jail. But the main parties involved are all here.

University of Miami president Donna Shalala -- accompanied by her legal counsel -- made their way upstairs here at an undisclosed downtown hotel near the NCAA headquarters around 8 a.m. for breakfast after meeting with all her staffers in a private room.

Hurricanes football coach Al Golden, not among those alleged to have broken rules but here because he's supporting his program, gave a fist pump as he left the breakfast area for a moment.

Current UM basketball coach Jim Larranaga, athletic director Blake James and Atlantic Coast Conference Commissioner John Swofford were all among those who were in UM's private meeting room before breakfast.

Missouri coach Frank Haith, charged with a failure to promote an atmosphere of compliance during his time at UM, was among the handful of former coaches who also made their way up to the breakfast room.

Louisville assistant Clint Hurtt, facing allegations of receiving and providing impermissible benefits and the dreaded 10.1 rule of unethical conduct for providing false and misleading information during the investigation, was one of the last people to enter the breakfast area.

The doors to the breakfast room closed at 8:30 a.m.

UM has said it will not comment publicly before, during or after the hearings over the next three days.

The NCAA isn't expected to render a decision for at least six weeks or more.

HERE ARE SOME MORE PHOTOS FROM THIS MORNING