Five weeks after being released from a hospital in North Carolina following a near-death, two-week bout with pneumonia, University of Miami baseball coach Jim Morris is definitely feeling better these days. 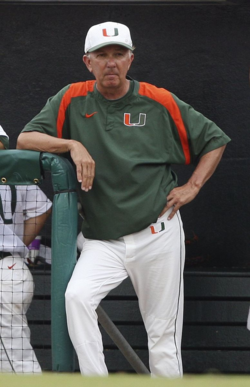 In fact, he's pretty much zeroed in on one thing -- Friday's 5 p.m. deadline for Major League Baseball Draft picks to sign with their pro teams.

As usual this time of year, Morris, 63, is hoping to get lucky and have a few of his high-end recruits pass on big league money and head to college.

"We've got six guys, counting two guys on our team [pitchers Bryan Radziewski and Javi Salas] we're waiting on," said Morris, who is still receiving chest x-rays and having blood drawn once a week by doctors monitoring his recovery.

The players the Canes are sweating out most are power hitting Hialeah Mater Academy outfielder Willie Abreu (Reds, 14th round) and Derik Beauprez (25th round, Red Sox), a 6-5, 210-pound right-handed pitcher from Cherry Creek, Colo. who can hit 95 on the radar gun.

Other Hurricanes signees who were drafted include C/1B Zack Collins of Plantation American Heritage (27th round, 825th overall, Reds) and OF Jacob Heyward of McDonough, Ga. (38th round, 1,153rd overall, Braves). Collins is already enrolled in classes at UM. Heyward is the younger brother of Braves right fielder Jason Heyward.

"Most of our guys are coming and most of our position players are back," Morris said. "I thought we would lose [outfielder] Dale Carey but we didn't. He's back. Tyler Palmer, our leadoff hitter, is back. We've got to replace Chantz Mack in right, but our catcher Garrett Kennedy is back. Kennedy is maybe our most improved player or MVP for last yer. Our pitching rotation, the strength of our club, should be back. B-Rad, [Chris] Diaz, [Andrew] Suarez, Salas our closer. You can tell I'm excited. I think we're going to have a good club next year with these guys and our recruiting class."

That's assuming of course Morris doesn't get a dose of bad news on Friday around 5 o'clock.

Freshman standout David Thompson, who had corrective surgery on his throwing shoulder last month, said Tuesday he's out of a sling and feeling better than he did a year ago when he had surgery the first time to repair a torn labrum.

"I've got a while to get 100 percent and get ready for the season, but I'm feeling great. We're taking it slow this time," said Thompson, who on Monday earned Freshman All-American honors from Perfect Game.

"Flexibility wise it's better. The strength obviously isn't close to where it needs to get to, but we have a great training staff and I know it will get there."

Morris said Thompson will be able to field grounders at third base when fall practice opens Oct. 21, but said he probably won't begin throwing again until January. Morris said he expects Thompson, who paced the Hurricanes with six home runs, 46 runs batted in, 84 total bases, a .462 slugging percentage and 14 multi-RBI games, to be able to play third base moving forward. Thompson split the season between first and third.

Thompson, a two-sport standout when he was a star at Miami Westminster Christian, called giving up football and playing quarterback for the Hurricanes probably the hardest decision he ever had to make last month.

"It hurt a lot. I spent a lot of nights in tears just wondering if I made the right or wrong decision," Thompson said. "But ultimately I think it was the right decision to focus on baseball. I hadn't had a healthy season in a couple years. I always thought I would end up playing baseball in the long run."

Morris said the fact Thompson played football in the past is a big reason he was able to fight through the shoulder pain during his freshman season.

"Thompson worked very hard through his rehab, played through pain, sucked it up and played the whole season for us even though he was hurting," Morris said. "It takes a tough kid to do that. Sometimes it takes a football guy. I love our guys to play football because it makes them tougher."

Hurricanes sophomore lefthander Chris Diaz, who earned one of 24 coveted roster spots on the USA Baseball Collegiate National Team, traveled to Japan to this week compete for Team USA in its international schedule. He's made one relief appearance thus far, giving up one hit over two-thirds of an inning.

Upon returning home, Team USA will play a pair of exhibition games before opening up a five-game series against Cuba on July 18 in Des Moines, Iowa.

He's the first Hurricane to play for Team USA since Yasmani Grandal in 2009.

"I'm excited for him. I love to see these guys get an opportunity to play for their country. He's a Cuban-American kid. One of happiest days for Yonder Alonso's career was at the University of Miami was the day he got his citizenship. Sometimes I think everybody who is born here takes it for granted that you're a citizen of the U.S. and doesn't understand what it means. For a kid like him to put on a USA uniform and represent his country is very special."