There will be no media access until Monday, four days before the opener against FAU.

UM coach Al Golden made it clear Monday morning that the depth chart could change before kickoff.

Anthony Chickillo is back as a co-starter with Shayon Green at defensive end, with Green listed on the other side as well.

Newcomer Justin Renfrow is now the backup to D-tackle Curtis Porter, with David Gilbert the backup to D-end Green. Junior college transfer Ufomba Kamalu is the third-team D-end behind Chickillo/Green.

Alex Figueroa is now listed ahead of Thurston Armbrister at outside linebacker, with an "or'' between their names.

At cornerback, Tracy Howard is ahead of Antonio Crawford, with an "or'' between their names; and on the other side, Ladarius Gunter is the starter, with "Nate Dortch or Artie Burns'' behind him.

Kacy Rodgers and AJ Highsmith are the starting safeties, with Deon Bush behind Rodgers and Rayshawn Jenkins behind Highsmith.

Offensively, it's "Dallas Crawford or Eduardo Clements'' behind Duke Johnson at tailback.

And Clive Walford has overtaken Asante Cleveland as the top tight end.

Freshman Walter Tucker has moved from linebacker to backup fullback -- presumably because redshirt freshman RB Danny Dillard is no longer on the roster and has left the team, as confirmed Tuesday morning by UM. 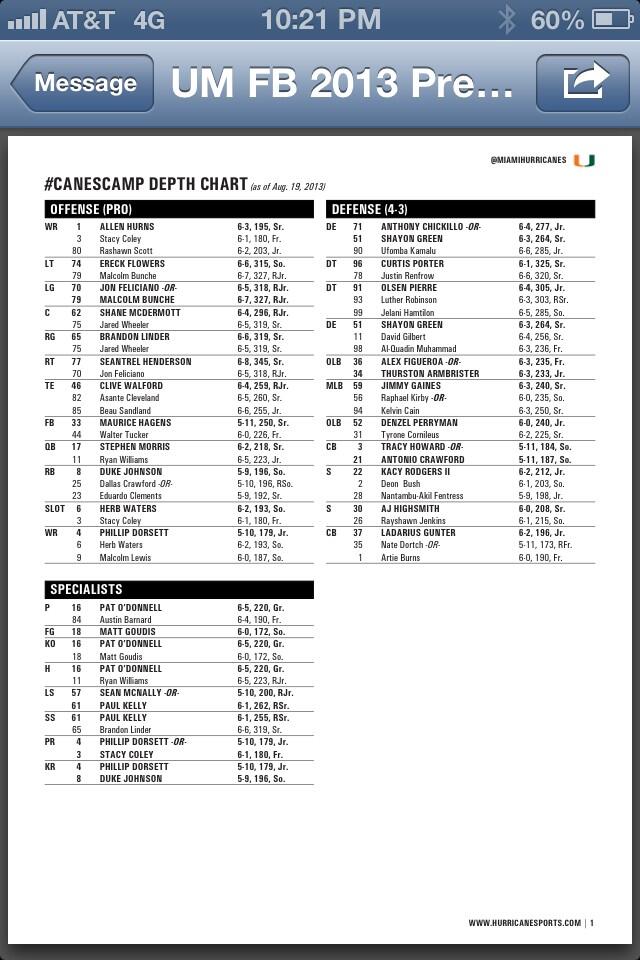