Tale of the Tape: Breaking down UM-FSU 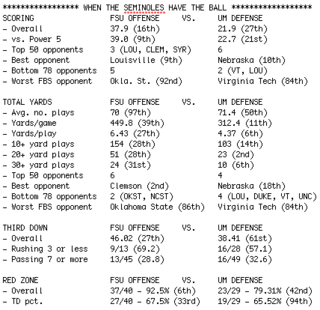 > When FSU runs the ball: FSU averages just 32 rushes a game (113th fewest) and the running game ranks 104th nationally (129.89 per game). The 'Noles have faced six top-50 ranked run defenses including No. 2 Louisville (173 yards, 3 TDs) and No. 4 Clemson (13 yards, 2 TDs). Senior Karlos Williams has run for 520 yards and is averaging a pedestrian 4.37 yards per carry. Freshman Dalvin Cook, Mr. Florida Football last season at Miami Central, is averaging 5.27 yards per carry and has run for 416 yards and five scores. But he's fighting through a hip injury. UM's run defense led by Denzel Perryman has vastly improved (3.31 yards per carry ranks 17th nationally) and the team has faced some good backs already including Nebraska's Ameer Abdullah (1,250 yards, 5th nationally), Duke's Shaun Wilson (9.22 yards per carry, 2nd nationally) and Georgia Tech's Synjyn Days (6.21 yards per carry, 54th). The biggest improvement for the Hurricanes has been cutting down on the big play. Last year, the Canes gave up 15 run plays of 20 yards or more. This year, they have allowed just four (tied for 1st nationally). Coach Al Golden said that's a product of better tackling. If the Canes keep playing this way they will slow down FSU's so-so running game. Edge: Miami.

> When FSU throws the ball: The Hurricanes haven't faced a pass offense or quarterback quite like Jameis Winston this season. No, Winston is not having the kind of season (2,540 yards, 17 TDs, 11 INTs) he had a year ago (4,057 yards, 40 TDs, 10 INTs). But whatever struggles he has in the first half of games (63.9 comp. pct, 1,183 yards, 8 TDs, 8 INTs) he fixes them in the second half (69.8 comp. pct, 1,357 yards, 9 TDs, 3 INTs). Although FSU did lose a first round pick in receiver Kelvin Benjamin and a veteran pass-catcher in Kenny Shaw from last year's team, Winston still has Seminoles all-time leading receiver Rashad Greene to throw to. The former St. Thomas Aquinas standout ranks sixth nationally in catches with 71 and he's averaging 109.9 yards per game (8th most). Senior tight end Nick O'Leary (33 catches, 364 yards, 2 TDs) is also still around as a security blanket. Winston also has a pair of five-star freshmen in Homestead's Ermon Lane and West Palm Beach Cardinal Newman's Travis Rudolph, who only has 19 catches this season but ranks 62nd nationally with 16.21 yards per reception. Miami ranks 18th in opposing quarterback rating (108.17), but the Canes have only faced three passers ranked among the Top 50. And the best of that group, Cincinnati quarterback Gunner Kiel, played with bruised ribs against UM. He threw for 355 yards and three scores against the Canes (most of it came in the second half when the game was decided). Miami has plenty of veterans in the secondary -- led by corners Ladarius Gunter and Tracy Howard and safety Deon Bush -- so youth isn't an excuse. But this is a very tough assignment. UM had a season-high six sacks in its win over North Carolina. Winston has been sacked 19 times, but has four seniors blocking for him including three potential draft picks in left tackle Cameron Irving, left guard Josue Matias and right guard Tre' Jackson. Edge: Florida State. 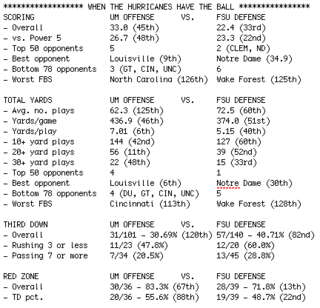 > When UM runs the ball: The Hurricanes come in red-hot having churned out 994 yards rushing and nine touchdowns over their last three games after making a full-fledged commitment to the ground game (137 rushes compared to 60 passes). Running back Duke Johnson ranks eighth nationally in rushing yards per game (134.78) and 12th in yards per carry (7.68). Freshman Joe Yearby (6.48) and sophomore Gus Edwards (6.18) have provided a nice lift off the bench and rank 40th and 56th respectively in yards per carry. FSU's run defense ranks 25th in yards per carry (3.54) and 35th in yards per game (135.67), but the Seminoles haven't faced much in the way of prolific running backs or run offenses. Virginia's Kevin Parks (669 yards, 67th) and Notre Dame's Tarean Folston (562 yards, 99th) are FSU's only previous opponents ranked in the top 100 in rushing yards. No FSU foe before UM ranked in the top 50 in rushing. The Seminoles, though, are coming off their best day of the season stopping the run, holding Virginia to 37 yards thanks to nine tackles for loss and four sacks. The defensive line is anchored by potential first round picks Eddie Goldman and Mario Edwards. UM could have starting left tackle Ereck Flowers (knee surgery) back in the lineup Saturday, moving veteran Jon Feliciano back to right tackle and freshman Trevor Darling into a backup role. Edge: Miami.

> When UM throws the ball: The Seminoles lost two key members from their national championship-winning secondary to the draft in Lamarcus Joyner and Terrence Brooks. But there's still tons of talent around. Cornerback P.J. Williams is a projected first round pick and counterpart Ronald Darby is expected to be a second rounder. Still, the results haven't shown on the field often enough for FSU this season. The 'Noles rank 66th in opposing QB rating (they ranked 2nd last year) and have already given up more TD passes (15) and big plays (32 pass plays of 20 yards or more) than they did all last year. And they've only faced two quarterbacks ranked in the Top 50: Notre Dame's Everett Golson (313 yards, 3 TDs, 2 INTs) and Louisville's Will Gardner (330 yards, 1 TD, 1 INT). Canes freshman quarterback Brad Kaaya has better numbers than both of those guys. But he also has benefited from a very good running game over the last three weeks, helping him stay interception free. Kaaya, though, figures to be asked to throw more this week. He made plenty of tough throws at Nebraska earlier this season and had his best game (359 yards, 3 TDs). Nebraska ranks second in opposing QB rating. Florida State's pass rush is something UM feared last year, but the Seminoles have just 16 sacks this season. They had 35 last year. UM has allowed only 15. Receiver Phillip Dorsett leads the nation with 30.11 yards per catch and is always a big play threat. Senior Clive Walford ranks second among tight ends with six touchdown catches and leads the team with 29 catches. Where FSU could ultimately win this battle is on third down. UM has been a lot better on third down in its last two wins (13 of 28, 46.4%) compared to its season average of 30.69% (120th nationally). But that's because the Canes have run the ball and haven't asked Kaaya to throw on third and long (UM is 7 of 34 on 3rd down and seven yards or more). FSU isn't dominant on third down (82nd nationally at 40.71%), but they are good on 3rd and long (13 of 45, 28.8%). Edge: Even.

> Special teams: Florida State has gone 136 consecutive games without giving up a kick return for a score -- the longest streak in the nation. UM, meanwhile, has struggled in kickoff coverage giving up seven returns of 30 yards or longer (109th worst) including a touchdown to Louisville. FSU speedster Kermit Whitfield has just one return this season longer than 30 yards, but led the nation last year with a 36.4 kick return average. UM's Stacy Coley, one of the most explosive freshmen in the country last year, ranks 36th in kickoff return average (24.69) but is going up against a Seminoles kick coverage team that's longest return allowed was 34 yards. Seminoles kicker Roberto Aguayo is 37 of 39 for his career on field goal attempts and has made three from 50 yards or longer including a career-long 52-yarder earlier this year against Wake Forest. Miami walk-on kicker Michael Badgley has gone 7-of-8 on field goal attempts and has a career-long of 42 yards. His only miss was from 50-plus. UM punter Justin Vogel has been a valuable weapon of late and has pinned opponents inside their 20-yard line on 20 of his 38 punts this season. FSU's Cason Beatty has allowed returns on just 16 of his 34 punts and has had 11 go inside the 20. FSU's Rashad Greene has had two punt returns over 20 yards this season and his 10.00 average ranks 28th nationally. Edge: FSU.