« Brad Kaaya misses practice with the flu, opens door (in practice) for Malik Rosier | Main | Second Hurricanes' spring scrimmage in the books. Thanks to Al Golden for letting media watch. »

Ron Fraser to be immortalized by statue outside of ballpark he loved. Dedication 4/24 before FSU opener.

As the No. 17 Hurricanes (16-6, 4-2 Atlantic Coast Conference) prepare to open an ACC weekend series at Wake Forest (first pitch set for 6 p.m. Friday), the good news has come down that the man who built the program will be immortalized April 24 outside the ballpark he loved.

Ron Fraser, who led the Canes for 30 years from 1963-92 and died in 2013, will have his statue dedicated and unveiled before the series opener against Florida State. The ceremony will be free and open to the public on the DiMare Family Champions Plaza outside of Mark Light Field at Alex Rodriguez Park, with no tickets required to gain entrance.

The statue was primarily funded by friends and fans of Fraser, who never posted a losing season and won national titles in 1982 and 1985.

"The entire Fraser family is very excited about the dedication and unveiling of the statue on April 24,'' said Fraser's daughter, Cynthia, on behalf of the Fraser family, in a prepared statement issued by UM. "We are so grateful to the donors and the University for this wonderful tribute, and can't wait to see Ron Fraser back at Mark Light."

Added UM athletic director Blake James: "Ron Fraser touched the lives of thousands through his passion for baseball and for people. It is fitting that his immeasurable love for this community will forever be present at the entrance of our ballpark.''

Current UM coach Jim Morris, who won national titles at UM in 1999 and 2001, said Fraser "was not only the most influential person in college baseball history, but also the most influential in my own professional career. Having a statue in front of our park, honoring all that he did both on the field and off, is going to be something special for his family, our program and for our fans."

Tickets are expected to sell out for the FSU opener at 7 p.m. the night of the dedication. Go to CanesTix.com to purchase tickets.

This is one of those feel-good occasions you likely won't want to miss if you're a Hurricanes fan. 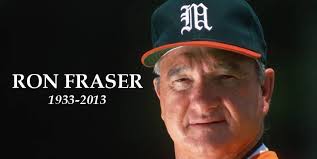