« Miami Hurricanes lead all ACC baseball programs with eight players selected to All-ACC teams | Main | Not hard, not soft -- this LB lists himself as a "medium'' Miami Hurricanes commit in the world of recruiting » 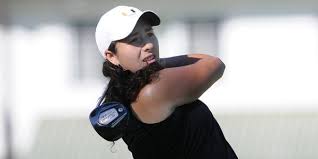 Congratulations to Daniela Darquea, who last night qualified for the US Women's Open Golf Championship.

Here's the release that UM just sent out...

“I’m super excited. I’m speechless,” Darquea said. “I’m really looking forward to competing in the U.S. Open. It was a very long and difficult course and when the wind blew that made it really tough.”

The Quito, Ecuador native shined as she carded six birdies. The Bradenton Sectional Qualifier featured over 70 competitors on the challenging par 71 course, which measured over 6,300 yards.

“I’m not surprised that Dani qualified for the U.S. Open,” said head coach Patti Rizzo. “Dani is a great player. I’ve always said that every part of her game is strong. I’m sure she’ll do great in the Open. She is on the perfect path to the top. She is one of the players that I really thought in my 10 years of coaching could really make it big.”

The 70th U.S. Women’s Open Golf Championship will be held July 9-12 at Lancaster Country Club in Lancaster, Pa. Darquea will compete in the U.S. Open as an amateur.

Darquea’s bid to the U.S. Open adds to an already impressive 2014-15 campaign where she was one of 12 golfers selected to the ACC’s all-league team.

In addition, Darquea finished in the top 15 in seven different events, including a winning performance at the Briar’s Creek Invitational. Darquea tied for eighth at the 2015 ACC Championship after she carded a three-round total of 214.

The U.S. Women’s Open will be aired live on Fox Sports 1 and Fox Sports. ­­