The University of Miami baseball program not only led the ACC with the best overall record of 42-13, it led with eight players selected to the 2015 All-ACC teams, announced Monday by the ACC. 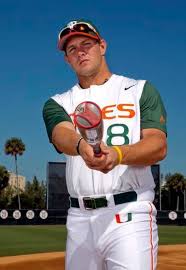 Thompson is the nation's RBI leader with 78, led the ACC with 19 home runs and was named one of 35 semifinalists for the Dick Howser Trophy. Collins finished the season batting .310 with 14 homers and 60 RBI -- second most in the ACC. Iskenderian finished the regular season hitting an ACC-best .391 and starting all 55 games.

Junior left-hander Thomas Woodrey, who ended the regular season with a 6-2 record and 2.62 ERA, was UM's second-team selection. Woodrey earned ACC Pitcher of the Week Monday after he pitched a one-hit, complete-game shutout against Georgia Tech -- the first for UM since 2003.

No. 2 seed UM opens the ACC tournament at 3 p.m. Wednesday against the winner of a play-in game Tuesday in Durham, North Carolina, between No. 7 seed Virginia and No. 10 seed Georgia Tech. UM's opener will be on RSN/ESPN3 and on 560 WQAM and WVUM 90.5 FM.

Here's some interesting info on the Hurricanes from my final regular-season game coverage this past weekend. Click on this!