« Sights galore from 7-on-7 tourney at the University of Miami | Main | Just out: Hurricane Club reaches annual fundraising goal of $9.9 million »

Remember Colin McCarthy? He messaged me on Twitter this a.m. with news. 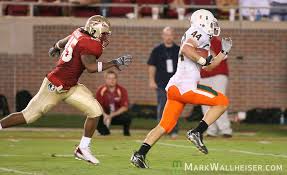 Colin McCarthy, one of UM’s many talented linebackers of the past, messaged me this morning on Twitter that he “is officially retiring today.

“Thank you for all your support along the way,’’ McCarthy wrote to me just after 5 a.m. “It’s been a good run…’’

What a nice person and an accomplished middle linebacker who made quite a name for himself with the Tennessee Titans before major left-shoulder surgery last August –the same shoulder on which he had surgery while playing at UM – put him on the injured reserve list all last season and apparently led to his decision.

He sustained the last shoulder injury in the Titans' 2014 preseason opener. He also sustained a concussion while playing through a high-ankle sprain in 2012. 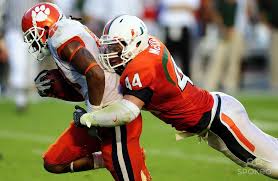 In just his second season in the NFL, McCarthy was voted as the team's defensive captain -- a big honor after starting seven of his 13 NFL games as a rookie.

McCarthy, a former All-State linebacker who starred at Clearwater Catholic, turned 27 on May 30th.

He received his undergraduate degree in business management from Miami, and was with the Hurricanes for five seasons. His last season was 2010, also former coach Randy Shannon’s final season.

When I think of Colin I think of that exciting interception return at Florida State in 2007 that sealed an amazing UM comeback victory. He keeps that football in a trophy case in his home.

His senior season at UM, Colin led all defenders with 119 tackles. he had 10.5 tackles-for-loss, four quarterback hurries, a sack, forced fumble and interception.

I wish him all the luck in the world, but I have a feeling he doesn't need it.

TALLAHASSEE -- Just when it seemed as though Kirby Freeman couldn't play any worse, he saved the University of Miami's season.

With starting quarterback Kyle Wright on the sideline after injuring his left knee and ankle in the first half, Freeman lofted a 13-yard pass to tight end Dedrick Epps, who fell in the right corner of the end zone to stun most of the 82,728 in attendance at Doak Campbell Stadium and put UM ahead 30-29 with 1:15 left.

Then, to ensure the victory and put the few thousand Miami fans in an absolute frenzy, Colin McCarthy's 27-yard fumble recovery 11 seconds later made it 37-29 and capped one of the most exciting games of a rivalry rife with them.

Suddenly, a UM team that appeared to be spinning out of control is confident and feeling as exuberant as it has all season. Now 5-3 and 2-2 in the Atlantic Coast Conference, the Hurricanes need to win one of their last four games to qualify for a bowl berth.

"Everybody said it wasn't going to be a big game. Well, you know what? ABC is happy, we're happy -- Florida State might not be as happy," said UM coach Randy Shannon, who was serenaded by fans with chants of Ran-dy Sha-nnon as he walked into the tunnel toward the locker room.

Seconds later, Freeman approached the tunnel and the fans sang his name as well.