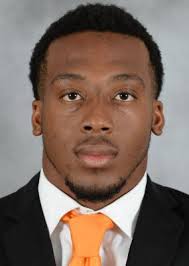 University of Miami fans who thought the Hurricanes had trouble tackling Friday against FAU should take up meditation immediately – especially with the Nebraska Cornhuskers and running back Terrell Newby coming to Sun Life Stadium at 3:30 p.m. Saturday.

Miami coach Al Golden revealed Sunday that strong-side linebacker Darrion Owens, who began the season as the starter, is out with a season-ending knee injury. Golden said Owens will have surgery in “about 10 days.’’

“Darrion Owens will be lost for the season,’’ Golden said during his weekly teleconference. “Obviously a tremendous young man and arguably one of our hardest workers. We feel badly for him. But we have some guys that have got to step up. We have to have the next-man mentality and get that situated by the time we go back to work on Tuesday.’’

Owens, a sophomore from Orange Park, Fla., fell to the ground clutching his right knee with 2:09 left in the first quarter of UM’s 44-20 victory at FAU. He was seen on the sidelines in tears.

Owens had four tackles in the first two games. Last year as a true freshman he had 23 tackles in 12 games.  His career-high in tackles – seven – came last year against the Cornhuskers.

Nebraska no longer has star running back Ameer Abdullah, but does have heir apparent Newby, who rushed 28 times for 198 yards this past Saturday in a 48-9 win over South Alabama.

Golden said 6-3, 236-pound senior Tyriq McCord, who has played both rush end and linebacker at UM, will help compensate for Owens’ absence. Also in the mix, starting rush end Trent Harris, who can slide into the strong-side linebacker spot because Al-Quadin Muhammad is back at rush end.

Even true freshman strong-side linebacker Jamie Gordinier is “on alert,’’ Golden said, but would play only “if we incurred another injury.’’

Another true freshman that could be elevated, if needed: defensive end Scott Patchan, who had been rehabbing from his own ACL tear dating to early last season. “If there’s another injury at either one of the outside backer position than he might have to be elevated,’’ Golden said of Patchan.

Added Golden: “To be honest with you, everybody is kind of on alert.”

At times Friday against FAU, especially in the first half, UM'S defense looked lost as the Owls racked up 292 yards – 168 of them on the ground because of what sometimes amounted to shoddy tackling that led to huge chunks of yardage.

Owens is UM’s second player to go down with a season-ending injury. Running back Gus Edwards was also lost for the season with a foot injury.