Canes notes: What the loss of Edwards means; Golden on Thomas, Muhammad as backups; Kaaya on turning 20 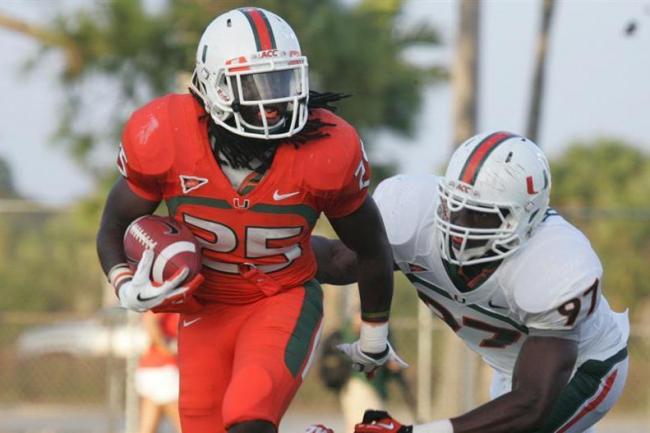 When fifth-year senior safety Dallas Crawford heard running back Gus Edwards was lost for the season over the weekend, he wasn't worried UM coaches were going to ask him to switch back to offense.

In fact, he wasn't worried much at all.

"We have a lot of good running backs out there with Joe, Mark and Choc," said Crawford, who was named a starter at safety Sunday, a season after he first switched from offense to defense. "They don't need me. They can handle it."

Tuesday, Golden reiterated he's confident UM has enough depth at the running back position to survive to loss of Edwards, who according to Golden was ruled out for the season after doctors performed surgery on his left foot Saturday and realized the injury was worse than initially diagnosed.

Golden said the fact UM's four running backs split carries evenly in camp has the team better prepared for Edwards' loss. He said if more help is needed at running back UM has "other things in place" so as not to move Crawford.

"I wanted from the get-go give all four guys reps with the ones," he said. "Even [fullback] Walter Tucker got reps, inside run. We don't feel we'll miss a beat there. Disappointed for Gus, he worked really hard."

Still, odds are UM will miss Edwards (6-2, 241) and his presence in short-yardage situations. Sophomore Joseph Yearby (5-9, 195) and freshman Mark Walton (5-10, 195) don't deliver big blows like Edwards does, and sophomore Trayone Gray (6-2, 215) is still growing into the position after having played quarterback and receiver in high school.

Gray said Tuesday he expects he'll get most of what would have been Edwards carries around the goal line and in short-yardage.

"It's tough," Crawford said. "Gus was primed to have a breakout year. He looked good every practice this camp. Things happen. I know Mark is ready. Joe is ready. Choc is ready. Tuck is ready. He's their biggest supporter. He was in the meetings today, has a good attitude. I know those guys will pick up the slack."

Said safety Deon Bush: "I'm very confident in the running backs. They're tough and they pound for yards. You can put any three of those guys in and they're going to fight for yards."

"We're excited about both those guys," Golden said. "This is the deepest we've been on the defensive line. [Ufomba] Kamalu has had a great camp for us, is 295 pounds now. Chad obviously will be in the rotation early. Maybe it's 1 and 1A. And RJ McIntosh has had a really good camp and will be in the mix. At the other spot Trent [Harris] was one of our most reliable players on defense a year ago. He doesn't make any [mental errors], exact every play. Demetrius [Jackson] had a good camp. We're not discouraged with Quan, Quan's going to be a heck of a player. Quan also missed 13 games a year ago. Those guys are going to be impactful. Our biggest change up front is how many we can put in the game."

> None of the Hurricanes wanted to talk about the photos that hit social media over the weekend depicting players in odd positions.

> What does quarterback Brad Kaaya want for his 20th birthday, which is Thursday?

It's been an eventful 13 months since Kaaya arrived on campus. He was thrown into the fire and responded well as a true freshman.

Does he think he was too young when he looks back on last season?

"Yeah, in a sense," he said. "When half your teammates are 22, 23 and half of them have kids or are married, so obviously in that sense. Yes."

With Duke Johnson and other stars gone he's been asked even more to become the face of the team this season, throwing out first pitches at games and being involved much more in the community.

"I'm comfortable with it," he said. "It just comes with being a quarterback here. It's just something I have to do. Even as a player at the University of Miami, or all over the country, people are expecting you to give back to the community. You can't be introverted, stay here all day. You've got to give back."

Kaaya's third down and fourth quarter were areas he admits were weak spots for him last year as a true freshman. But he's not taking all the blame for it either.

"There are 10 other guys on the field," he said "We have to operate on money downs and third and fourth downs. As an offense, that's where our focus was. It wasn't our biggest focus. But it was a focus [this off-season].

"Obviously, I watched the film and know I have to get better. But I'm not really sulking in last year. This is a new season now. It's September 2015. Some of those issues were happening in October and November 2014. I mean, I've moved on."