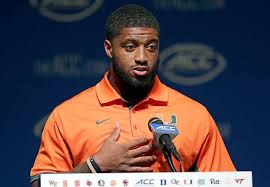 Feeling badly for Raphael Kirby, UM's middle linebacker who ended his season Saturday --and effectively, his college career -- in the third quarter against Virginia Tech when he sustained a severe right-knee injury running to make a tackle.

Kirby is a team captain and the biggest leader on defense, not to mention the leading tackler with 44 tackles -- 15 more than No. 2 tackler Jermaine Grace. He has always been a first-class young man on and off the field, and with the media -- very mature and willing to talk.

Kirby will have major surgery Wednesday. Coach Al Golden did not divulge the specifics of the injury.

"We are tremendously disappointed for Raphael Kirby,'' Golden said in a written statement, later saying on a teleconference with reporters that he was "crushed.

"He is the true definition of a leader in the field, in the community and in the classroom. His commitment to our team and our goals has been unquestioned over his career and he will be sorely missed. We will support Raphael through his recovery as we continue to lean on his leadership for our team.''

Golden said tonight that he'll have outside linebacker/rush end Trent Harris help fill in for Kirby's absence. The new starting middle linebacker is Juwon Young, who did a fine job coming in for Kirby. Young had one of the Canes' three picks Saturday, and added four tackle in less than a quarter and a half. Harris is the Hurricane who recovered a fumble to set up Joe Yearby's rushing touchdown.

UM previously lost sophomore linebackers Darrion Owens (knee) and Marques Gayot (neck) for the season, so this one is an especially huge blow.