« Butch Davis is interested in becoming UM's next coach, but is UM really interested in him? | Main | Dana Smith: Rest In Peace. GoFundMe set up for Miami Hurricane Artie Burns and his younger brothers. » 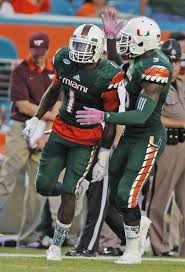 Tragic news on the University of Miami football front.

Dana Smith, the mother of University of Miami star cornerback Artie Burns, is at a local hospital in grave condition, according to someone close to the team.

UM's football staff was informed that Smith had a heart attack, though that has not been officially confirmed.

Smith, a former track star at Miami Northwestern High, has raised Artie and his two younger brothers, Thomas, 15, and Jordan, 12.

Thomas, a sophomore football player at Northwestern, has committed to the Hurricanes.

Artie Burns is tied for third in the nation with five interceptions.

His status for the Duke game in Durham, North Carolina, at 7 p.m. Saturday is obviously not known.

Burns' latest tweet Sunday, after Golden was fired: "Finishing the season strong for coach golden. wise men did a lot for me.''

Dana Smith talked to the Miami Herald last week and seemed to beam through the phone about her sons.

“I am so proud of Artie,’’ Smith said. “Through all the adversity of not having a father, he’s overcome it and has been a positive role model for his family.’’

Smith said not to assume that her son would turn pro after this season. He is a gifted hurdler who has goals of being in the 2016 Olympics.